Horses2Herbs Hidden Carrol False Perspective The Paul Juraszek Monolith (by Marcus Wills, 2006) Snark Hunt: Square One Billiard-Marker & Henry George Liddell 3D-CrossedEyesTechnique Charles Darwin Priest in the Mouth Bard and Bellman Gnarly Monstrance Thumb & Lappet 42 Boxes meet the Iconoclasts From Doré's Root to Holiday's Rat The Carpenter and Ahasuerus Weeds turned Horses (2) John Everett Millais: Lorenzo and Isabella (detail… The Baker's 42 Boxes Holiday and Gheeraerts I Bankersnatched by the Bandersnatch Holiday - Millais- Anonymous - Galle, detail Craneflies Gestrüpp Thomas Cramer's hand? "But if ever I meet with a Boojum, that day, I sha… The Butcher and Benjamin Jowett 32 Butterflies for a 16-port FFT Shibuya Evening 電機! Beagle and Beagle? The Bell? Ditchley Snark Ditchley Snark IT WAS A BOOJUM While he rattled a couple of bones Photographing Photographers Asakusabashimatsuri While he rattled a couple of bones TruthProof What I tell you three times is true! Crossing the Line Anne I? Tree of Life The Bellman and Father Time Snark Hunting with the HMS Beagle

The GIMP The GIMP 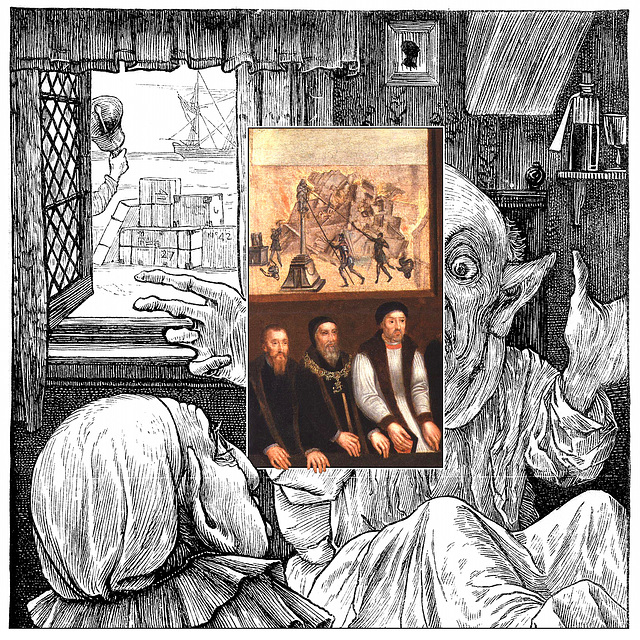 "I personally don't look for secret messages hidden by Carroll in the text; rather, I look at themes and symbols as potential hints as to the sorts of things that were on Carroll's mind at the time."
Darien Graham-Smith, 2005-10-05

[color]: Segment from a painting (c. 1570) by an unknown artist (commons.wikimedia.org/wiki/File:Ed_and_pope.png).The segment is displayed in a mirrored view. Thomas Cranmer is located on the right side in the mirrored image. (Among other persons in the painting not shown in this segment: Edward VI, Henry VIII).
There is a book about this painting where Thomas Cranmer is identified: Margaret Aston, The King's Bedpost: Reformation and Iconography in a Tudor Group Portrait, 1994.

How could the number 42 get into anyone's mind? Douglas Adams made that number popular as an answer to everything. (But what was the question?) In The Hitchhiker's Guide to the Galaxy he (similar to many other writers, e.g. Tom Stoppard) challenged his readers with allusions to the works of earlier writers. An earlier writer who had an obvious affinity to the number 42 is known as Lewis Carroll. And, as I learned from John Tufail, "before the 39 articles of Faith that Carroll [the Rev. Dodgson] declined to attest to, there were 42 articles [written by Thomas Cranmer]."

Of course, like Adams, Carroll wouldn't give any good reason for his affinity (not only in the Snark) to the number 42 either, but he surely knew, that "Forty-Two" is an important number in the history of Anglicanism: In the mind of Charles Lutwidge Dodgson (aka Lewis Carroll) the Forty-Two Articles of Thomas Cranmer surely had their place.

The Baker in Lewis Carroll's The Hunting of the Snark has many features in common with Thomas Cramer. Many of his nick names are associated with heat or having been burnt : "Fry me!" or "Fritter my wig!", "Candle-ends" or "Toasted-cheese".

Cranmer later was accused of heresy and had to leave his articles behind him before he heroically recanted his recantations: "On 14 February 1556, he was degraded from his episcopal and sacerdotal offices in preparation for execution. Following his trial, Cranmer was put under intense pressure to recant. Desperately lonely and broken, Cranmer at last signed a series of six recantations, the last of which rejected his entire theological development. Although the more traditional practice was to impose a lesser sentence on recanted heretics, Mary maintained that Cranmer should burn. On 21 March 1556, Cranmer was to recant publicly, using a speech that had been endorsed by the government before suffering his punishment. Instead, he stunned the authorities and the gathered crowd by recanting not his earlier theological positions but the recantations themselves. He then ran to the stake and steadfastly held his right hand, the hand that had signed the recantations, in the fire. His heroic end undid much of the government's planned propaganda against him and his Protestant cause and earned him an honored place in Foxe's catalog of Protestant martyrs." (Encyclopedia Britannica, 1911) "... By 1900, the Anglican Church had altered dramatically. Though still the established national church in England, it had lost most of its civil advantages over other religious groups, and it had been disestablished in Ireland. The internal management and administration had improved considerably, and the clergy provided a more pastoral service which included greater participation on the part of their congregations. Most notably, the differing shades of opinion in the earlier Anglican Church had polarised into three internal sects which operated against a background of competition rather than consensus: the High Church Anglo-Catholics, the Low Church Evangelicals, and the Broad Church Liberals.

Though I have described the revolution as "bloodless", it was not without battles. The most damaging was the one between traditional religious doctrine and the new moral and scientific discoveries which evolved throughout the nineteenth century. The dichotomy between faith and science brought about a national crisis of faith, the ramifications of which still persist to this day. This crisis reached its apogee in the middle years of the nineteenth century, at the very time when Dodgson was considering his vocation for the priesthood. ..."

By Michael O'Connor, originally published in "Impossible Things", Jabberwocky, the _Journal of the Lewis Carroll Society, dated Winter 1993/94 (Vol. 23, No.1). In 1552, shortly before the early death of Edward VI, Thomas Cranmer wrote down 42 articles, a protestant doctrine. In Henry Holiday's depiction of the staple of some of the Baker's 42 boxes piled up outside of the window of the Baker's uncle's room, the numbering of the boxes #27 and #42 is visible. (Another number perhaps may be either #11 or #41.) In Cranmer's 42 articles this would correspond to:

#27. The Wickedness of the Ministers doth not take away the effectual Operation of God's Ordinance.Although in the visible Church the evil be ever mingled with the good, and sometime the evil have chief authority in the ministration of the Word and sacraments: yet forasmuchas they do not have the same in their own name but do minister by Christ's commission, and authority: we may use their ministry both in hearing the Word of God, and in the receiving the sacraments. either is the effect of God's ordinances taken away by their wickedness, nor the grace of God's gifts diminished from such, as by faith, and rightly receive the sacraments ministered unto them, which be effectual because of Christ's institution and promise, although they be ministered by evil men. Nevertheless it appetaineth to the discipline of the Church, that inquiry be made of such (evil ministers), and that they be accused by those that have knowledge of their offences, and finally, being found guilty by just judgement, be disposed.

#42. All men shall not be saved at the length.They also are worthy of condemnation, who endeavour at this time in restore the dangerous opinion that all men, by they never so ungodly, shall at length be saved, when they have suffered pains for their sins a certain time appointed by God's justice.
9 years ago. Edited 8 years ago. | Permalink

1553: The Forty-Two Articles are imposed on Church of England, along with a new Catechism and Primer of a decidedly reformed protestant orientation.

A royal mandate requires all clergy, schoolmasters and university members upon taking degrees to subscribe to the XLII Articles. They are written by Thomas Cranmer, but never receive the consent of Convocation and are never enforced by law.

The Forty-Two Articles of 1553 have four additional articles of an eschatological nature, namely on the resurrection of the dead, on the condition of the souls of the departed, on the millenarian heresy, and on eternal damnation of the wicked. All four were dropped at the revision of 1563 which produced the Thirty-Eight Articles. The addition of article XXIX on the manducatio impiorum achieved the final number of the XXXIX Articles of the Church of England.

In 1563, Convocation met under Archbishop Matthew Parker to revise the Articles. Convocation passed only 39 of the 42, and Queen Elizabeth I reduced the number to 38 by throwing out Article XXIX. In 1571, the 29th Article, despite the opposition of Bishop Edmund Guest, author of Article XXVIII, was inserted. The language of Article XXIX is based on the writings of Saint Augustine.

[...]
Carrol, Lewis, pen name of Charles Lutwidge Dodgson (1832 –1898), English writer, mathematician, logician, Anglican deacon and photographer. The author of the famous Alice in Wonderland . No evidence seen to date to of explicit expression of universalism by him. However, he was a very close friend of George MacDonald and in 1862, seemingly as a result of Rev. H.B. Wilson being charged with heresy for questioning eternal punishment, Carrol eschewed attendance at St Mary Magdalene, the prestigious University Parish Church and instead travelled each Sunday to London to attend St Peter's Church in Vere St (just off Oxford Street), where the incumbent was the radical and controversial hopeful universalist F.D. Maurice. Some have seen he author’s tolerant and equable universalism in the famous races which follow under the Dodo’s presidency in Alice. ‘At last’ the Dodo said, 'everybody has won, and all must have prizes' (Alice in Wonderland). Carroll's diary for July 20 1862 reads: 'Morning and afternoon at Vere St. Mr Maurice preached both times. I like his sermons very much' (Carroll's diary for July 20 1862).
[...]
Source: evangelicaluniversalist.com/forum/viewtopic.php?p=54352
8 years ago. Edited 8 years ago. | Permalink

Rule #42 made up with clauses to silence remonstrance:

The helmsman used to stand by with tears in his eyes; he knew it was all wrong, but alas! Rule 42 of the Code, “No one shall speak to the Man at the Helm,” had been completed by the Bellman himself with the words “and the Man at the Helm shall speak to no one.“ So remonstrance was impossible, and no steering could be done till the next varnishing day. During these bewildering intervals the ship usually sailed backwards.
(Lewis Carroll, The Hunting of the Snark, Preface)

At this moment the King, who had been for some time busily writing in his note-book, cackled out `Silence!' and read out from his book, `Rule Forty-two. ALL PERSONS MORE THAN A MILE HIGH TO LEAVE THE COURT.'
Everybody looked at Alice.
`I'm not a mile high,' said Alice.
`You are,' said the King.
`Nearly two miles high,' added the Queen.
`Well, I shan't go, at any rate,' said Alice: `besides, that's not a regular rule: you invented it just now.'
`It's the oldest rule in the book,' said the King.
`Then it ought to be Number One,' said Alice.
(Lewis Carroll, Alice in Wonderland Chapters XI and XII (The Trial of the Knave of Hearts))

All men shall not be saved at the length. They also are worthy of condemnation, who endeavour at this time in restore the dangerous opinion that all men, by they never so ungodly, shall at length be saved, when they have suffered pains for their sins a certain time appointed by God's justice.
(Last article in Thomas Cranmer's Forty-Two Articles)
8 years ago. Edited 7 years ago. | Permalink 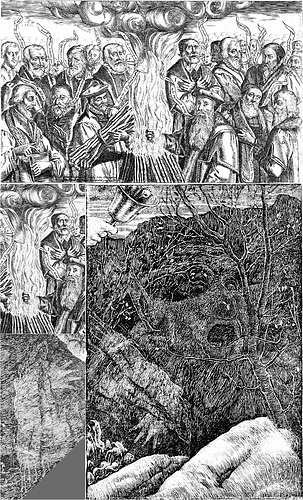 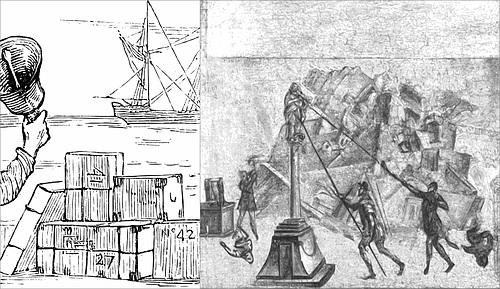