Les visions du chevalier tondal (1475, detail in g… Two Mouths les-visions-du-chevalier-tondal C2G The Baker's uncle Yoda's relative is Carroll on the Rocks Face It! Burning the Baker Nose is a Nose is a Nose «L.C. forgot that "the Snark" is a tragedy and [sh… The Vanishing of Thomas Cranmer Thomas Cranmer's Boojum Faiths Victorie in Romes Crueltie Thomas Cranmer's Boojum (with inset) Bart Johnson - L.A. Woman (2015) Anthropomorphic Landscapes The Vanishing & Thomas Cranmer's Burning IT WAS A BOOJUM Planned redesign of the entrance of the former Roc… Surrounded by Monsters The Vivisector Bonnet Head h40 - Care and Hope How to make The Omnipotent even more omnipotent h12 - Butcher and Beaver h20 - BellmansMap h11 - The Snark Hunting Party h10 - The Landing h60 - Snark Court h70 - The Banker's Fate h30 - The Baker's Uncle

The Baker's 42 Boxes and Iconoclasm 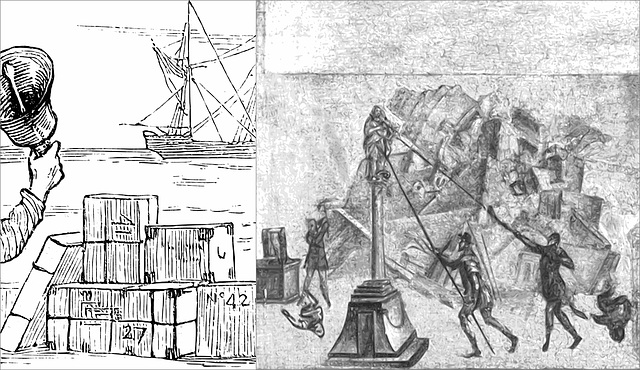 [left]: Detail from Henry Holiday's depiction of the Baker's 42 boxes in an illustration (engraved by Joseph Swain) to Lewis Carroll's The Hunting of the Snark.

[right]: Anonymous: Detail from the painting Edward VI and the Pope, An Allegory of Reformation, mirrored view (16th century). Iconoclasm depicted in a window-like inset. Under the inset sits Thomas Cranmer (not visible in this detail) who wrote the 42 Articles in 1552. In The King's Bedpost: Reformation and Iconography in a Tudor Group Portrait (1994, p. 72), the late Margaret Aston compared the iconoclastic scene to prints depicting the destruction of the Tower of Babel (Philip Galle after Maarten van Heemskerck, 1567).
CC BY-NC-ND 3.0 Götz Kluge The Baker's 42 Boxes and Iconoclasm
Suggested groups:
Comments 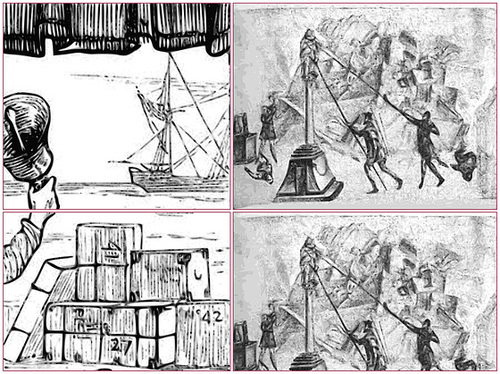