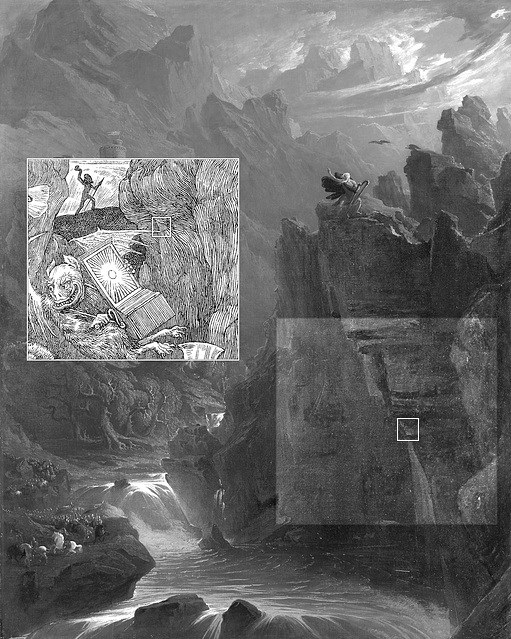 I used this small image in a comment to publicdomainreview.org/collections/the-art-of-hidden-faces-anthropomorphic-landscapes

Antropomorphism isn't about faces only. Actually, humans have two pairs of cheeks. One pair of these cheeks is part of our faces. The other pair of cheeks is elswhere on our bodies. (If sitters are sitters, you don't see that pair too well.) In the example below from one of Henry Holiday's illustration to Lewis Carroll's "The Hunting of the Snark" (engraved by Joseph Swain), Holiday wasn't inspired by John Martin's "The Bard" only. He also altered his allusion to that painting by giving the rocks the shape of our lower second pair of cheeks. And he also copied a small pattern from Martin's painting which doesn't contribute to the appearance of his illustration. Thus, this pattern simply may serve as a hint to the beholders of his Snark illustration that Holiday didn't steal anything from John Martin. Henry Holiday was an honest conundrum builder.

Did you find the antropomorphic "cheeks" on the rocks in the detail from Henry Holiday's illustration, which I mounted as an inset into John Martin's "The Bard"?

forever is a long time, buonacoppi have particularly liked this photo

The large version is here: www.ipernity.com/doc/goetzkluge/28488183
5 years ago. Edited 5 years ago. Translate | Permalink

thanks for sharing
5 years ago. | Permalink