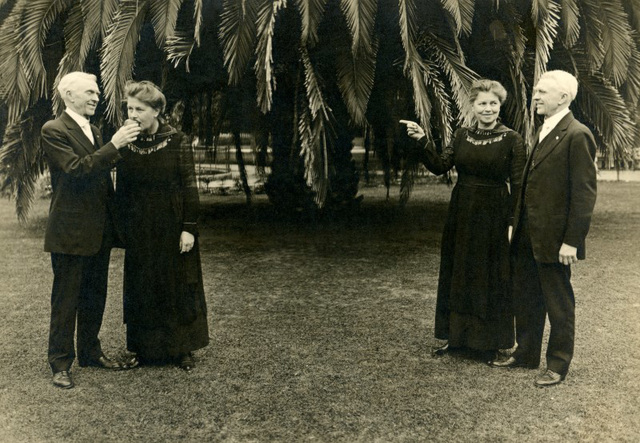 I chose photographic tricks and amusements for the free-for-all (post as many photos on as many different themes as you'd like) during the fifth week of Wild Card Month—Pick Your Own Theme! in the Vintage Photos Theme Park.

On the left-hand side of this photo, we see a woman taking a bite out of an apple offered to her by a man—shades of Adam and Eve! On the right, we see the same couple, and they've noticed the other version of themselves—the woman is pointing in their direction and the man is looking over at them.

According to the typed label attached to the back, this is a photo of "Mr. & Mrs. Emerson Clover, Central Park, Whittier, California, March 31, 1921."

I haven't uncovered any information regarding how Emerson J. Clover (1854-1926) and his wife, Alice K. Clover (1864-1947) created this trick photo, but the double exposure is well done. Central Park in Whittier, California, still exists. Part of a circular fountain or other structure in the park is visible beyond the tree.

See also the full version of the photo, which is mounted on cardboard. 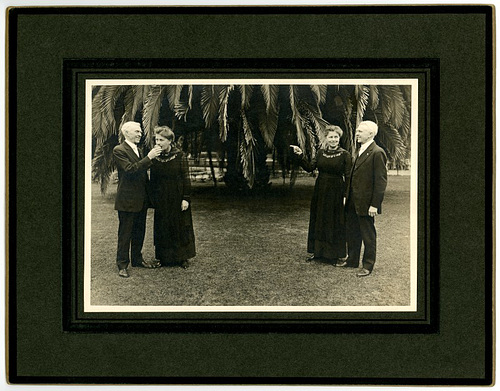 great choice! a cool use of double exposure. i'm always surprised that the backgrounds don't get too dark with double exposures. where do you find these things? do you have a whole room dedicated to old photos?
17 months ago. | Permalink
Alan Mays club
has replied to raingirl club

Thanks! I find most of my vintage photos and printed ephemera at local antique malls, flea markets, and postcard shows, although I do make some online purchases. I don't have a whole room devoted to my collection, but I have to admit that I do have a number of shelves and cabinets here and there in a couple of rooms that contain items.
17 months ago. | Permalink

A wonderful and skillfully done trick photo!
And coincidentally, my new little grandson was born on July 29th - and named Emerson!
17 months ago. | Permalink
Alan Mays club
has replied to Deborah Lundbech club

Thanks! And a big congrats on the arrival of grandson Emerson!!!
17 months ago. | Permalink