A Signal from Mars? 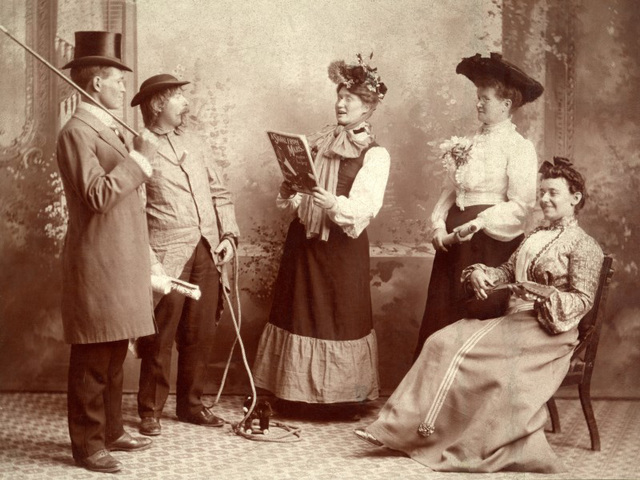 A Vintage Photos Theme Park photo for the theme of over the shoulder (something or somebody).

Everyone in this puzzling photo is holding something. The man on the left is holding a cane over his shoulder, and the second man has a rope wrapped around his left hand. Both men are watching the woman in the middle, who's holding sheet music and singing. The woman on the right, who's seated in a chair, is holding a lute and is playing it to accompany the woman who's singing. The woman standing beside the singer and both of the men are all holding rolled-up papers of some sort.

A closer look at the photo reveals some curious details. First, the sheet music that the woman is holding is entitled A Signal from Mars: March and Two Step, which was published in 1901 (hear a piano version on YouTube). Since the piece is an instrumental "march and two step" without any lyrics, why is the woman pretending to use it as she's singing?

Secondly, the rope that the second man is holding extends down to the floor where it's coiled around a small horse pull toy. Why did the man lasso a tiny toy horse?

I don't have any answers for the questions that this photo poses. Although the painted backdrop and patterned floor covering suggest that this picture was taken in a photo studio, I wonder if this might be a scene from a theatrical production. There was a popular comedic play with a similar title—A Message from Mars—that toured the United States between 1903 and 1905. As far as I can determine, however, A Message from Mars was not a musical, and there was no connection to the sheet music for A Signal from Mars. 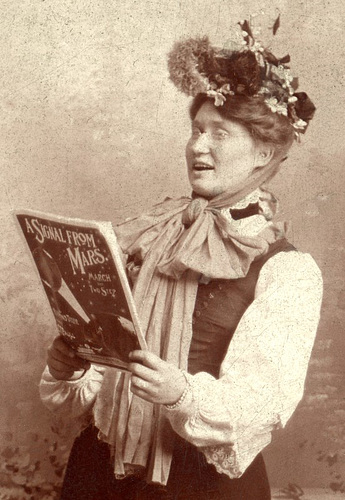 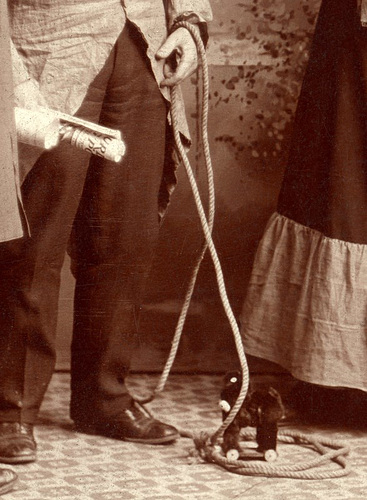 Fabulously weird.
It looks to me that the guy with the cane is impassively eying the lute playing woman - who is clearly a lunatic.
And thanks for the link to the catchy tune!
I have no idea what this is photograph is all about, but it's so very entertaining!
21 months ago. | Permalink