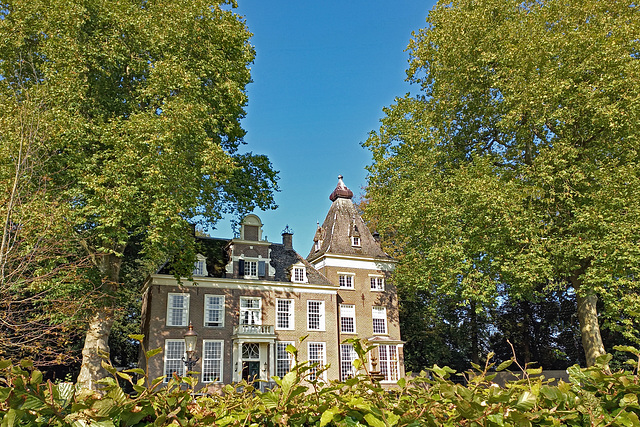 Huize Kruisvoorde is a monumental country house. Part of this former ‘havezate’ (manorial farm) dates from the 16th century. The building is also known as Crusefort, Cruystenvoorde or Cruysvoorde. The name probably refers to a voorde, a ford at a crossing of the trade route to Deventer and the dug waterway Terwoldse Wetering.

Huize Kruisvoorde - like nearby De Parckelaer - became a Dutch heritage site in 1971. Nowadays, the country house is privately owned.

Really a beautiful architecture and a fine framed picture too. Wish you a nice week ahead, Jaap !
6 weeks ago. | Permalink

have a nice week:)
6 weeks ago. Translate | Permalink

Two beautiful pictures Jaap and I always appreciate the information you give us, thank you.
Take care and have a good and healthy new week.
6 weeks ago. | Permalink

Beautiful in the sunshine...............and very nicely captured. Good to see a wider view in the PiP too. Lovely work as always Jaap.

Have a great week!
6 weeks ago. | Permalink

A very nicely framed shot of this beautiful house Jaap. The PiP shows the surrounding landscape very nicely. Thanks for the interesting notes.

Have a good week!
6 weeks ago. | Permalink

An elegant building, many of our old country houses are huge block like structures
6 weeks ago. | Permalink

Beautiful photos and PiPs along with interesting historical information.
6 weeks ago. | Permalink

Very nice pictures and interesting historical reference too. I can only stop and wonder, what would it be like to live in a place like this? So much history...I've never lived in a really old house, except for an old farm home that wasn't all that old when I stayed in it over the summer. Still, there was a ghost! Incredible!

So I had to go digging. Your fault.
And that old farm house has been totally redone into an air b n b home that is only recognizable from its shape and some of the rooms. What a difference!! www.airbnb.com/rooms/plus/17713970?source_impression_id=p3_1601679631_miHXndt60VJLIfX0&guests=1&adults=1
6 weeks ago. | Permalink

I love the tower, although it detracts from the symmetry of the original.
6 weeks ago. | Permalink

Splendid view and good composition Jaap.
Thank you for the note.
6 weeks ago. | Permalink

Privately owned? Wow, I guess the owners are not the poorest of the country ;-)))
6 weeks ago. | Permalink
Jaap van 't Veen club
has replied to Christa1004 club

Its square tower gives it an imposing stature.
Both photos are beautifully luminous and very well composed.
Have a nice weekend, Jaap
6 weeks ago. | Permalink