Lesser Goldfinches in the Teasel Patch! 328/365: "Moral courage is higher and a rarer virt… Frosted Dagger! Frosted Wire and "The Cremation of Sam McGee" by R… Frosted Rusty Fence Post (and intro to "The Cremat… 329/365: "It's the cursed cold, and it's got right… The Pearl and the Clam Thistle Parachute Floating Away 330/365: "I would rather be adorned by beauty of c… A Lovely End of a Wonderful Day Molly in Her Element (2 more inset pictures) 331/365: "We live only to discover beauty. All els… Shaggy Mushroom Me and Little Belle 332/365: "There's no happier person than a truly t… "Amazing Autumn Sky" with Dynamic Auto Painter: Il… "Amazing Autumn Sky" with Dynamic Auto Painter: Aq… Cool Manzanita Burl A Heart for Shelby 333/365: “Seize opportunity by the beard, for it i… [STORYTIME!] Another Spider Leaves A Spring Presen… The Magical and Mysterious Amber Droplets! 334/365: “With confidence, you have won before you… British Soldiers and Bokeh 327/365: "You go through life wondering what is it… 10-Wk Picture Projects: Trees, Wk 6: Trunk/Branche… Oak Tree in the Mist 326/365: "Peace is a daily, a weekly, a monthly pr… Weeping Cosmos Textured Zinnia Kissed by Frost 325/365: "Nature hath framed strange fellows in he… Frosted Chocolate Mushrooms A Frosted Rusty Nail in Frosted Old Wood Frosted Earthstar from Above 324/365: "Everyone can identify with a fragrant ga… Another Gorgeous Sunset with Boiling Clouds Mushroom with Bendy Stem! 323/365: "The true lover of rain.... has a deep in… Droplets on Yellowing Rose Leaf Against Sky Droplets in Curled Rose Leaf 322/365: "This joy of discovery is real, and it is… Tiny (4-5mm Tall) Mushrooms with Blue-Green Fungus… "A smile is the light in your window that tells ot… 321/365: "There is no friendship, no love, like th… The Sunday Challenge--Minimalism: Glowing Mushroom… 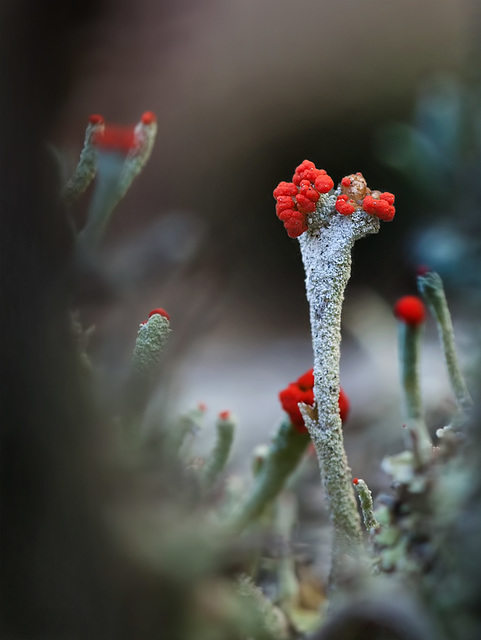 This is a close up of the British Soldier in the main image. I wanted to show the wonderful detail! :)

From Tom Volk's Fungus of the Month for July 2002:

Cladonia cristatella [cluh-DOHN-ee-uh cris-ta-TELL-uh] is a very common and well known lichen, found throughout the northeastern USA into Canada. There are look-alike species throughout most of the world as well. The little red "caps" that resemble the red hats worn by invading British troops during the American Revolutionary war give the lichen its common name of the the "Bristish Soldier Lichen." In reality, the red hats are actually the sexual fruiting structure of the lichen, the apothecia.
(be sure to visit Tom's page for the full article!)

Marco, Maria Mickle, Marcos, Jeanne and 21 other people have particularly liked this photo

♥ You always put the wonders of nature in a special light.
7 years ago. | Permalink

They are an especially pretty fungus.
7 years ago. | Permalink

Love this closeup, first seen as an inset in your other photo. Just a beautiful capture, well worth your efforts!
7 years ago. | Permalink