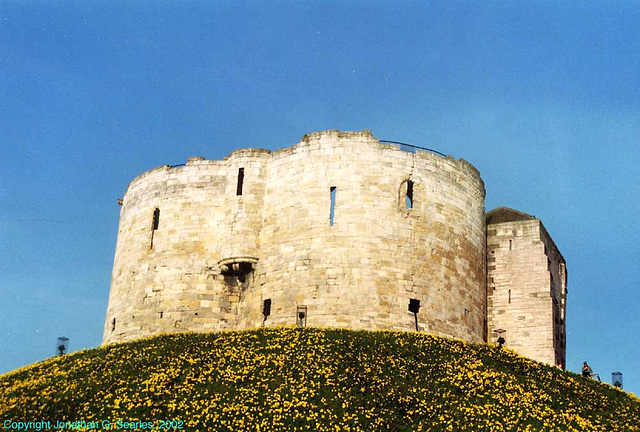 This was an old photo that I recently decided to rescan, with decent results, I think. Clifford's Tower was the site of a Pogrom in 1190 A.D., but otherwise it's history is no more hideous than any other Norman military building. That means there was a bloodbath of one sort or another every few years, but it was no big deal, really. :-) It was originally built in 1068, and survived less than a year before being burned down by rebels, as it was originally built out of wood. The Normans didn't learn their lesson, though, and rebuilt it out of wood, instead brutalizing the population of York in retaliation, and we all know from recent events how well that works at quelling an uprising. The castle came under attack so often that it was finally rebuilt in stone in the latter part of the 13th Century, after having been burned down again in the Pogrom. It got its current name in 1322, when one Roger Clifford was hanged there, and in the 1660s (I'm not clear on the exact date) the wooden interior of the castle burned out, leaving little left inside that wasn't within the stone structure of the walls. It's nevertheless open to the public, even though it doesn't look it.
Suggested groups:
Comments