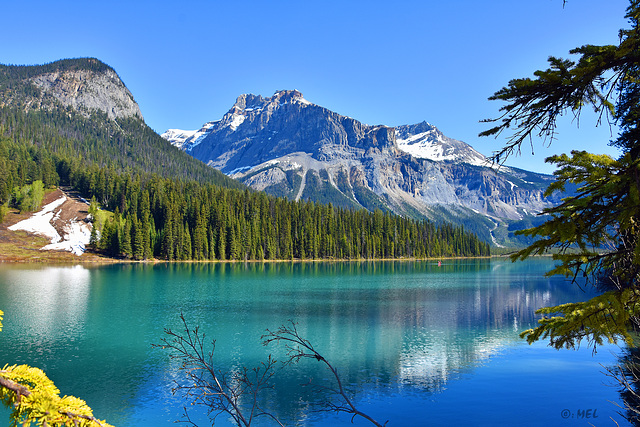 Emerald Lake is located in Yoho National Park, British Columbia, Canada. It is the largest of Yoho's 61 lakes and ponds, as well as one of the park's premier tourist attractions. Emerald Lake Lodge, a high-end lodge perched on the edge of the lake, provides local accommodation. A 5.2 km (3.2 mi) hiking trail circuits the lake, the first half of which is accessible to wheelchairs and strollers. During the summer months, canoe rentals are available; in the winter, the lake is a popular cross country skiing destination.
The lake is enclosed by mountains of the President Range, as well as Mount Burgess and Wapta Mountain. This basin traps storms, causing frequent rain in summer and heavy snowfalls in winter. This influx of moisture works with the lake's low elevation to produce a unique selection of flora. Trees found here are more typical of B.C.'s wet interior forests, such as western red cedar, western yew, western hemlock and western white pine. The alluvial fan on the northeast shore produces wildflowers in abundance during late June and early July.
Due to its high altitude, the lake is frozen from November until June. The vivid turquoise color of the water, caused by powdered limestone, is most spectacular in July as the snow melts from the surrounding mountains.
The first non-indigenous person to set sight on Emerald Lake was Canadian guide Tom Wilson, who stumbled upon it by accident in 1882. A string of his horses had gotten away, and it was while tracking them that he first entered the valley. The lake had an impression on even the most seasoned of explorers: "For a few moments I sat [on] my horse and enjoyed the rare, peaceful beauty of the scene." It was Wilson who gave the lake its name because of its remarkable colour, caused by fine particles of glacial sediment, also referred to as rock flour, suspended in the water. However, this was not the first time Wilson had dubbed a lake 'Emerald'. Earlier that same year he had discovered another lake which he had given the same moniker, and the name even appeared briefly on the official map. This first lake however, was shortly renamed Lake Louise. Q:Wikipedia

Xata, Gary Benson (grbenson3 on flickr), Annemarie, Ruebenkraut and 8 other people have particularly liked this photo

This one is gorgeous !
4 weeks ago. Translate | Permalink