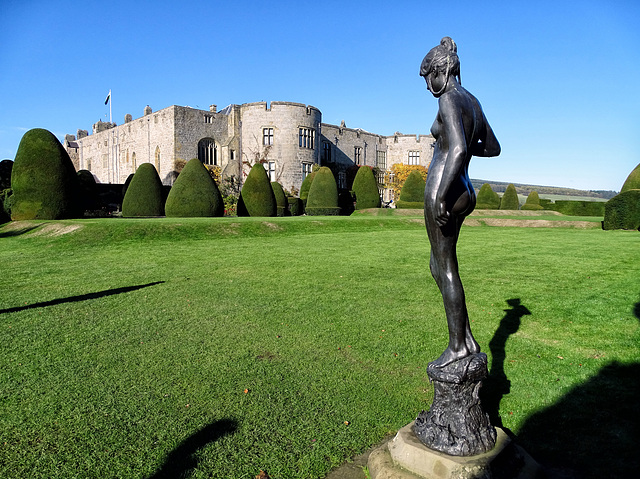 Andrea Carlo Lucchesi (1860 – 1924) was an Anglo-Italian sculptor born in London, whose father, from Tuscany, was a sculptor before him. Lucchesi trained at the West London School of Art and then at the Royal Academy. He started exhibiting in 1881. Lucchesi was an exponent of the late 19th-century British New Sculpture movement, a school based on naturalism and symbolism. His work, often mysterious and provocative, featured many female nudes; he considered the female figure to be “nature’s masterpiece”.

There are four bronze nymphs by Lucchesi in the grounds of Chirk Castle. The statues were installed in the gardens by Lord and Lady Howard de Walden, who leased the castle from the Myddelton family from 1911 to 1946. Thomas Scott-Ellis, 8th Baron Howard de Walden, was a writer and patron of the arts and spent vast sums repairing and re-fitting the castle.

©UdoSm club
She probably wants to get in there, because now in the autumn it will become cold ... ;-))
19 months ago. | Permalink

HappySnapper club
Any reason this statue is here, seems to be quiet modern against it's setting.
19 months ago. | Permalink
Amelia Heath club has replied to HappySnapper club
It's certainly more modern than the castle, Maurice, but there are 4 of these bronze nymphs, all slightly different, and each one is over 100 years old. This one is titled 'DESTINY' and was the winner of gold medals at Dresden in 1895 and at the 1900 Paris Exposition Universelle. Destiny is blindfolded.
19 months ago. | Permalink

Keith Burton club
A really beautiful statue................and a nice sharp shadow of it too! Well captured in beautiful surroundings Amelia.
19 months ago. | Permalink

Joe, Son of the Rock club
The architecture and sculpture are equally beautiful, Amelia. You have taken the photo from exactly the correct angle to make the shadows an interesting element in the composition. Cheers, Joe
19 months ago. | Permalink

tiabunna club
A stylish statue and very good of the lessees to leave these behind. A beautiful image.
19 months ago. | Permalink