The railway goes mostly on piles Trying to shoot (with the photo camera of course!!… Yuki waiting for the next show First view at a Manta The Manta is coming for sure Mantas don't like air bubbles??? Manta flying over us Manta's silhouette Can't stop photo shooting Mantas Manta and diver Close to the Manta head A flying young Manta turns over us Next capture ... no words, just euphoria Other Manta Ray appears Mantas gills The Mantas surface A small Manta from above Playing with the giant Manta Manta ray in its natural habitat Mantas fine hairy surface Harmonic flow of the Manta Manta with its full wingspread Touching the Manta is amazing ... The gate to board the train to Xining The tickets for a sleeping car The waiting room in the railway station Lhasa railway station The trail on the piles The map of the railway from Lhasa to Xining Xining Station Plaza Arriving Xining railway station on the dot Railway station in Xining First view in the early morning ... We enjoy the food in the train coach Inside the dining coach Headstream of the Changjiang River (Yangtze River) Late in the afternoon Along the Tongtian River Bizarre rock strata near Tanggula town Tanggula Mountain range Along the Tanggula mountain range Closer view to the Tanggula Mountain The first runlet of the Yangtze River One more view to the snow fields and glaciers The highway goes beside the train track 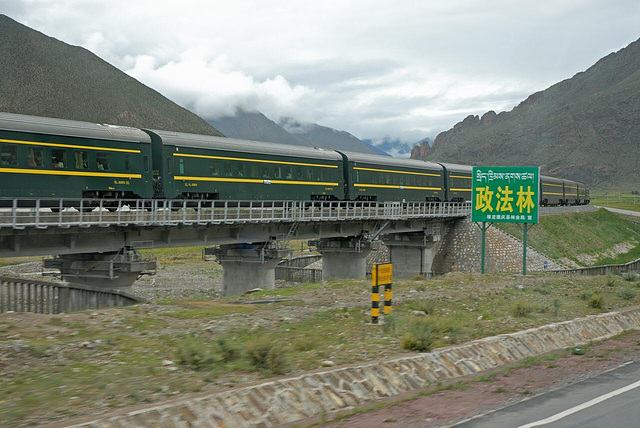 The total length of Qingzang railway is 1956 km. Construction of the 815 km section between Xining and Golmud was completed by 1984. The 1142 km section between Golmud and Lhasa was inaugurated on 1 July 2006 by president Hu Jintao: the first two passenger trains were "Qing 1" from Golmud to Lhasa, and "Zang 2" from Lhasa. This railway is the first to connect China proper with Tibet Autonomous Region, which due to its altitude and terrain is the last province-level entity in mainland China to have a conventional railway. Testing of the line and equipment started on 1 May 2006. Passenger trains run from Beijing, Chengdu, Chongqing, Guangzhou, Shanghai, Xining and Lanzhou.