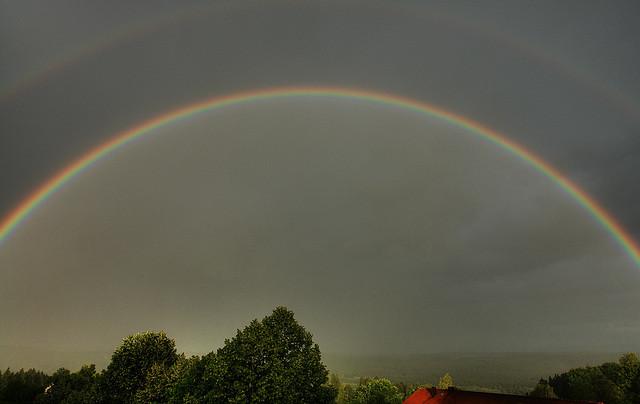 Thanks, the both of you! I’ll omit nothing to make people jealous! ;-)

But seriously, it can’t go on like this... I’ll shoot no more rainbows unless it’s a triple one.
14 years ago. | Permalink

Thanks, Werner! Especially for you (who are experimenting with HDR) and Sascha (who can’t believe his eyes), I have uploaded another version of the same picture.

If you’re shooting in RAW the Sony R1 camera saves both a RAW and a JPEG file to the card. The version below is the JPEG one, just as it came out of the camera (the black triangle on top was part of our roof, and eliminated by cropping). I tried to preserve the detail in the trees on the foreground, but this made the sky lighter than it actually was: you can’t have it both ways.
The RAW file was “developed” with the software that came with my Sony, the resulting TIFF file sent to Photomatix. It took care of both areas, and in spite of the (too conspicuous) halo around the tree tops –rather typical for HDR images– the over-all result is closer to reality than what you see below.