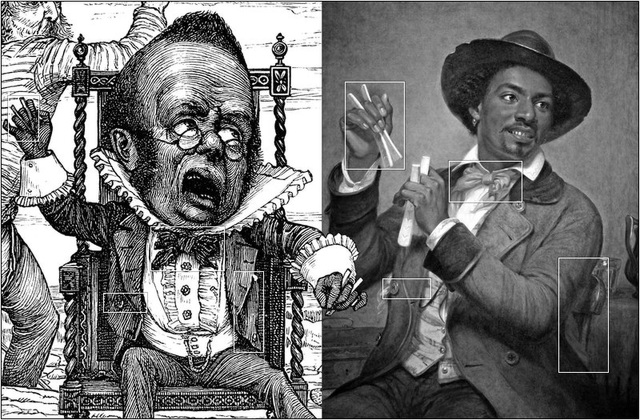 (larger, without notes, but more comments)

Mahendra Singh guided me to Mount's painting. I found a painting depicting a bone player in his blog which Mahendra used to tell us something about the bone ratteling Banker. Mahendra is a professional illustrator who not only is one of the few curageous and curious Snark hunters, but also (like Holiday) a very gifted architect of Snark conundrums in his own right. Just look at his own illustrations to his Snark edition (2010).
(justtheplaceforasnark.blogspot.com/2012/01/fit-7-pg-752-d...)

Mount painted The Bone Player after receiving a commission from the printers Goupil and Company for two pictures of African-American musicians to be lithographed (e.g.by Jean-Baptiste Adolphe Lafosse) for the European market. These became the last in a series of five life-size likenesses of musicians that Mount executed between 1849 and 1856.
(www.mfa.org/collections/object/the-bone-player-33207)

Could Henry Holiday have seen that lithograph? In London, Goupil & Cie was established by Ernest Gambart. 17 Southampton Street. Moved to 25 Bedford Street, Strand in 1875 when Goupil & Cie took over Holloway & Sons and their salerooms. Goupil's manager in London was at this time Charles Obach.
(en.wikipedia.org/wiki/Goupil_&_Cie)

This pictorial allusion goes along with a textual allusion by Lewis Carroll: 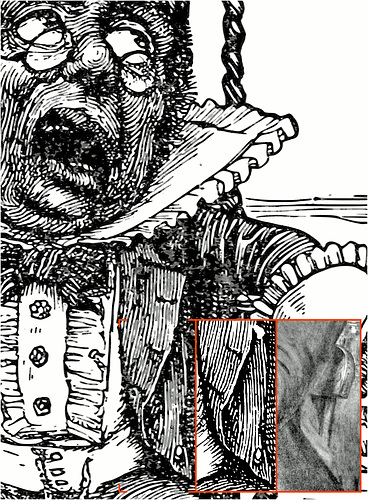 In a 1910 edition of The Hunting of the Snark, an alledged error, which is not an error, had been removed. However, the removed white spot had a reason, as you see in the inset. The inset shows a segment from a 1876 edition with the white spot and a segment from The Bone Player (1856) by William Sidney Mount with a white spot (depicting a reflection from a glass).