Star and Tail The Bellman and Sir Henry Lee The Banker's Nose and Spectacles While he rattled a couple of bones While he rattled a couple of bones IT WAS A BOOJUM Ditchley Snark Ditchley Snark The Snark in your Dreams Hidden Carrol Neuman, Butcher, Jowett Crossing the Line The Bellman and Father Time Inspiration by Reinterpretation Anne Hale Mrs. Hoskins The Broker's and the Monk's Nose William III, Religion and Liberty, Care and Hope Weeds turned Horses (BW) Monster Face Doré (1863), Holiday (1876), Doré (1866) Holiday and Gheeraerts I Henry Holiday alluding to John Martin A Nose Job Holiday - Millais - Anonymous - Galle From Doré's Root to Holiday's Rat The Bandersnatch fled as the others appeared Holiday - Millais - Anonymous - Galle

Kerchiefs and other shapes

[left]: Redrawn segment from one of Henry Holiday's pencil drafts for the depiction of the Baker's visit to his uncle (1876) in Lewis Carroll's The Hunting of the Snark.

[right]: John Everett Millais: Redrawn Segment from Christ in the House of His Parents (1850) depicting Mary (and a part of Christ's face in the upper right corner).

Such kind of pictorial obfuscation should not be a surprise as The Hunting of the Snark is a poem in which readers had been searching textual allusions since 1876. (Too obvuous allusions are too boring. The focus on textual analysis of the Snark seems to lead us to underestimate Holiday's paralleling Carroll's wordplay with is own means as an graphical artist.

By the way: In 1882, Alfred Parsons turned the Baker's ear into a part of a chair in Charles Darwin's study at Downe. Holiday quoted and was quoted. Artists like Parsons, Holiday and Millais (see below) do such things and have fun when playing their game. Today Mahendra Singh is maintaining the tradition, in the Snark and beyond the beast. 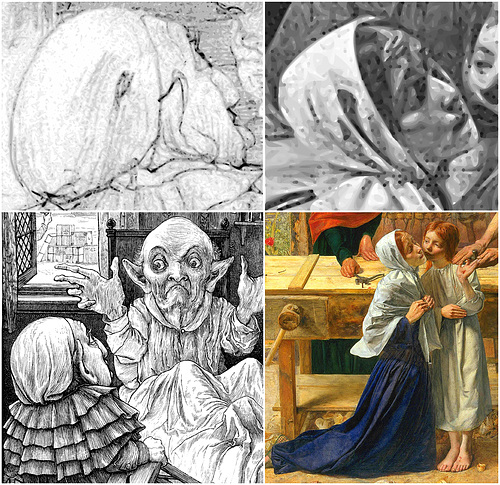