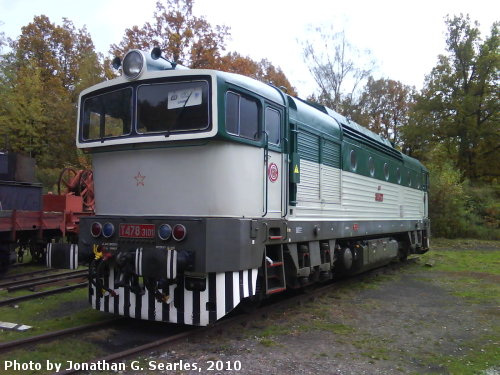 #T478.3101 is a CSD T478.3 Class "Brejlevec" or "bespectacled" diesel. I'm not aware of the built date, but locomotives of this class were built by CKD between 1968 and 1977. They were later classified CSD, and then CD, Class 753. They put out 1325kW (1777 horsepower) of power, and can run at up to 100Km/h (62 m.p.h.). In spite of this low maximum speed, some are still used on passenger services, although it stands to reason that the vast majority are used for freight. #T478.3101 is painted in one of the original Communist-era liveries with the red star on the nose.
Suggested groups:
Comments