Breakfast On DB, Somewhere in Belgium, 2007 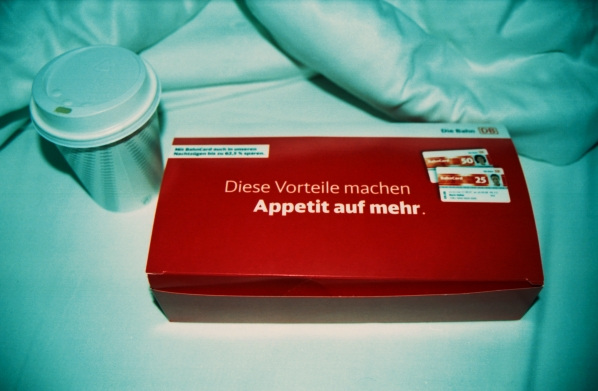 I unfortunately didn't think to shoot this picture until I had finished with breakfast, so you don't get to see the food. I was very good, though. NZ242 gets into Brussels so early that in the winter it's still dark out, so this was still essentially taken at night, with my flash. The lighting is still weirdly blue, though. I actually got ripped off on my tickets....again, as the agent sold me a first class ticket when I didn't ask for one. A benefit of this, though, was that I got a much nicer place to sleep than usual, on linen, and got a good breakfast the next morning. DB can certainly be called first class in any case, but a first class ticket was actually nice to have in the end, and not as expensive as it could have been, either. Almost anyplace else in the world I wouldn't have been able to afford it at all, and the trip would have never happened.
Suggested groups:
Comments