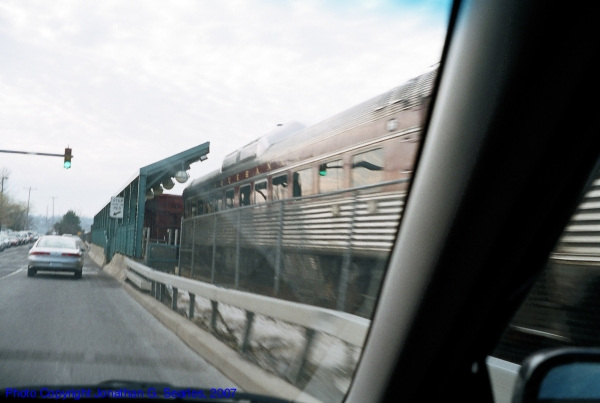 Ontrack, when it was first inaugerated, was part of the revival of rail transport, particularly within cities, which was going on during the 1990s, and continues to this day, in the U.S.A. This long predated the current spike in fuel costs, as pollution, traffic congestion, and simple public demand for more effective transportation all played more of a role in the beginning. Back in the 1990s, gas prices were sometimes as low as a dollar a gallon, so it's hard to make an argument that they played much of a role in the public transport revival. So.......what's going on with Ontrack now, in the days when it's needed more than ever? It's shut down, of course. It suffered a long decline, and as I understand it, this was partly due to simple failure to run at all. I'll always remember the time back in the early 2000s (I don't remember the date) when I was train watching on this platform for several hours, watching the scheduled arrival and departure times advertised on the platform come and go without seeing a single train. The platform was full of passengers, and when me and my railfan friends finally left after standing for several hours without seeing a single train, the passengers followed us. In any case, the station now seems to be in use for storage of the equipment, and in the middle of the Christmas season, when I took this photo, the parking lot of Carousel Mall was so congested that it took 20 minutes for us to find a parking space. Such is the predicament of public transport in Central New York.
Suggested groups:
Comments