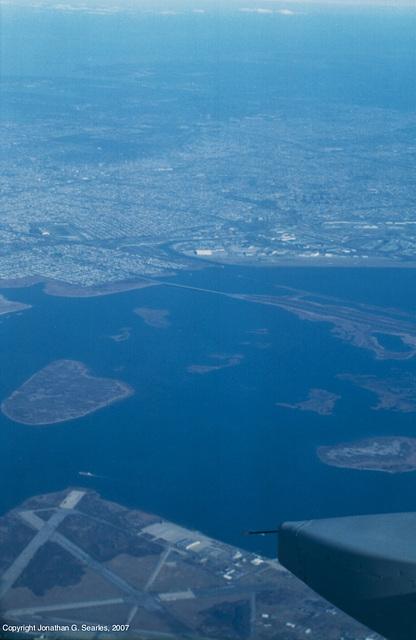 Here's another shot of an odd section of New York. That airport down there isn't LaGuardia, it isn't JFK, it isn't Newark, it isn't MacArthur, or even the now-closed Flushing, but rather is Floyd Bennet Field, which has some claim to being the city's oldest airport, being built in 1929, although Flushing was actually built in 1927, as was Republic. Roosevelt field, the origin of Lindbergh's transatlantic flight, was even older, dating to 1917, but it doesn't survive today, having been replaced by a mall. Therefore, Floyd Bennet Field's claim to being the oldest in the New York area is very dubious, although it's probably the second oldest within the official city limits (Flushing would be the oldest, I think). It's now a museum, and features some of the oldest surviving airport buildings in the United States, and therefore the world, dating back to 1930. It doesn't host regular flights anymore, meaning that Republic can lay claim to being the New York area's oldest functioning airport within New York State, although Teterboro airport in New Jersey is even older, dating to 1917, and is owned by the Port Authority of New York.

Thank you to *Reinhard* for marking this photo a favorite!! :-)
10 years ago. | Permalink