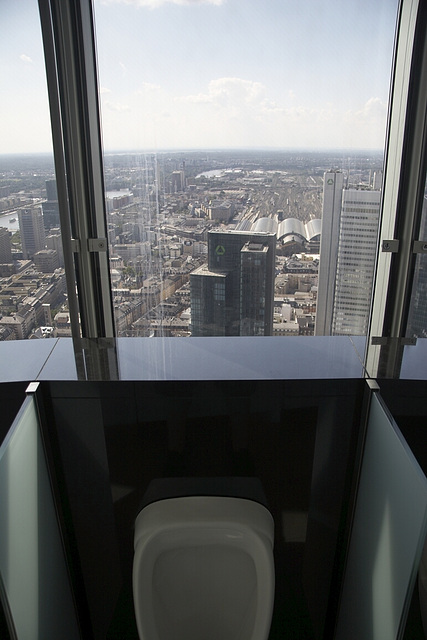 this would actually have been a good picture for the "Guess where in Frankfurt" group (if we had one here...).

This is the male toilet of the management floor in the Commerzbank tower in Frankfurt. It's famous not only for it's view, but because it seems you're peeing on the competition (Dresdner Bank) while using it ;)

The Commerzbank Tower is Germanys highest skyscraper, and one of the highest buildings in Europe (300m overall, including the antenna). It was built in 1994, the design was from Sir Norman Foster & Partners.

The building was designed for low energy consumption - it is not air conditioned but cooled by a combination of natural air flow and cold water pipes in the ceilings. The water in those pipes is used for flushing the toilets afterwards ;)
Also, through clever design, the need for artificial illumination was minimized, as the offices all have a relatively high amount of daylight coming in. All in all, the energy consumption is somewhat 30% lower than in comparable buildings.

Another nice feature are the 9 gardens, the highest in 140m. I'll post a pic from there sometime soon ;)