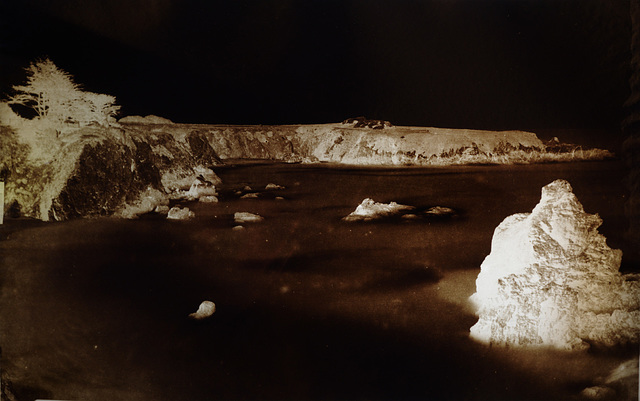 Duncan's Landing on the Sonoma Coast in California. The rock point in the distance is locally known as "Death Rock" because large waves occasionally wash over it and many fishermen have been swept off. Now the cliffs are fenced off with warning signs, but fishermen still occasionally take the risk until the park ranger chases them off.

Developed in 1.4g gallic in 200 ml DH2O
No image visible at start.
Added 2 eyedroppers of aceto-nitrate of silver ( ~0.75ml each )
Image appeared more slowly than usual.
At 38 minutes, added another 1/2 eyedropper, which did speed things up but not too much and still under good control.
Done at 50 minutes.

Dried for 3 days under a heavy book between several changes of blotter paper.

I think the calotype was slightly underexposed, but it looks fine and I hope it will print well. If I like the way it comes out, it may start a series of seaside calotypes.

This is a poor reproduction. I had to put it into a printfile sleeve because it was curling. The trees on the clifftop are perfectly crisp and full of detail. But you can get an idea what it looks like.

Wonder-full! I think the sea shore series would be great.
5 years ago. | Permalink
Ned club
has replied to J P Jackson club

Thanks! And I like the print enough that it's worth trying... we'll see how it goes!
5 years ago. | Permalink