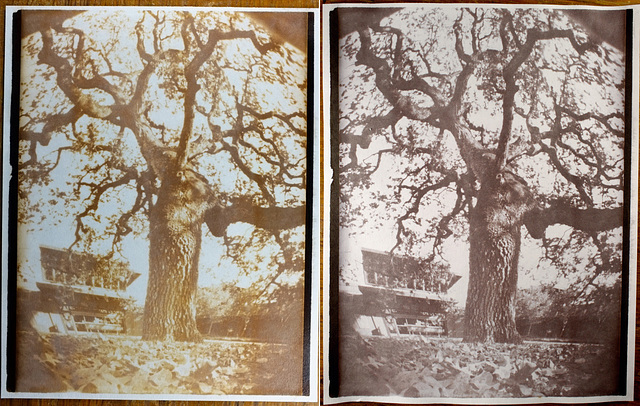 Left: still wet after fixing. According to Namias, the browns would get much darker if allowed to dry.

I read Namias' 1901 article describing an iron-silver process. It is somewhat like a so-called “Van Dyke Brown” print, but uses citric acid instead of tartaric acid. It is not one of the historic processes that has remained popular today. I can't find much record of its use, except in “sepia paper” used for copying technical drawings, similar to the way blueprints were used. Since I had all the needed supplies, I thought I'd try it.

I followed the directions in the article and made this print from a pinhole paper negative. Everything went just as Namias described, which in itself is a refreshing change from usual. Usually there are all sorts of things that can go wrong, but it made a nice print on the first try.

This must be the simplest and easiest printing process I've ever tried:

Everything was done as simply as possible. I already had eyedropper bottles of

that I use to make salt prints. I made another eyedropper bottle with:

This was much more than enough to coat a piece of 5x7 inch paper.

I used Canson Universal Sketch paper, which does have an alkaline buffer, but it worked just fine.
You can see the highlights are perfectly clear white with no fogging and no hint of yellow.

Brushed on with an inexpensive foam brush, no brush marks or uneven areas are visible.
Exposed it for ½ hour under BLB compact fluorescent lamps, it did not look done, so exposed for ½ hour more. Then it was time for dinner so I just turned the lamps off.

After dinner, it was interesting to see the image intensify in the wash, just as Namias described. Then it intensified again and changed color in the hypo. I used a rounded ½ teaspoon of sodium thiosulfate in about 60ml water to fix the image.

Namias recommended gold thiocyanate toner after fixing, so I mixed a weak toning solution of:

Toned in this for about 10 minutes, until it did not seem to be changing much.

Washed for an hour then dried on a sheet of glass overnight.

This is a fun and interesting process, and particularly simple. Next time I will let one dry down without toning and see what it looks like. With the right negative, it might make a nice print!

Formica, Graham Hughes, and 2 other people have particularly liked this photo

thanks for this info. Ned, could you please email me a copy.........durr brain her is having trouble getting to the article. info@gallery259.com
5 years ago. Edited 5 years ago. | Permalink
Ned club
has replied to Graham Hughes club

Hi Graham, will do. There might be an update soon, Loupe and I are working on a slightly different formula that also seems very good.
5 years ago. Edited 5 years ago. | Permalink