Chipper The Long Beach at Cheboygan The Long Beach at Cheboygan Raindrops Bee on the Sage Baby Starling Discovers the Birdbath Daffodils Who Invited You? Go 'Way Goldfinch Derek Hasenbeck Heck, Joel, You Coulda Shot that with Any Camera The Rose Bush Chipper at Feeder Goldfinch Oreo Trees along Lake Huron Only the Silo Remains Yardwork Seney Roses on Trellis Under the Tag Birdseed Daffodils Gone to Seed Age 64: Joel @ Thelma's Maple Leaves How About an Iris as an Orb? Phlox Let's Sing! Red-Bellied Woodpecker The Show's Back On! Breakfast! The Mackinac Straits Bridge Painted Daisies Tall Grasses Now She's Got Me Doing It! House Sparrow on the Feeder Columbine (Still) Got My Eye on You The Robin on the Lawn Breakfast Apple Blossoms Goldfinch, leaving The Nuthatch 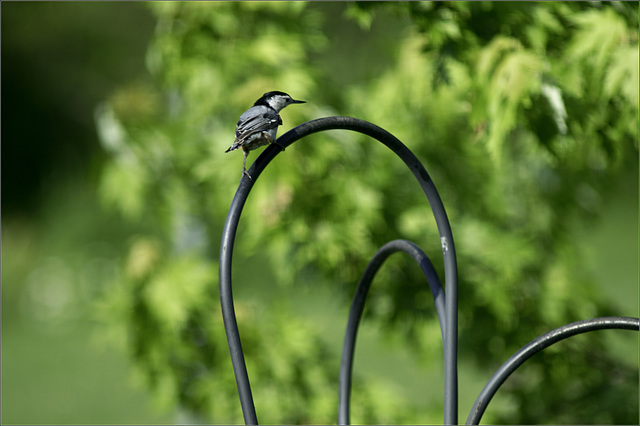 While I shot many photographs of birds last May 24--I called the folder "The Swallow, the Blackbird, the Nuthatch"--I chose to post one of the best pix I ever took of our cat, Taffy. Which undermines my argument about the camera's limitations, I suppose.

Before they built the neighborhood around us we always had blackbirds, but now they're relatively rare at our feeders. But every day, now, we get nuthatches, which we rarely saw fifteen years ago. Y' win some, y' lose some.

Number of project photos taken: 71
Title of "roll:" The Swallow, the Blackbird, the Nuthatch
Other photos taken on 5/24/2012: The Daily Flower Census found our poppies had opened; we also found our first lily.
CC BY-NC-SA 3.0 Joel Dinda The Nuthatch

FMW51 has particularly liked this photo