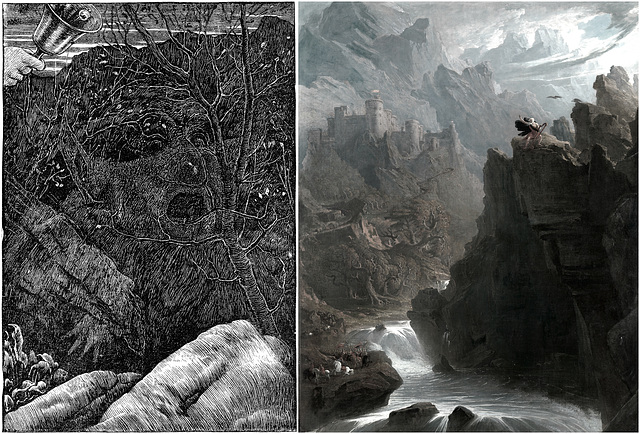 [left]: Henry Holiday: Illustration (1876) to chapter The Vanishing in Lewis Carroll's The Hunting of the Snark
[right]: John Martin: The Bard (ca. 1817), now in the Yale Center for British Art, desaturated (because color is not important for the comparison) & contrast increased

In mydailyartdisplay.wordpress.com/the-bard-by-john-martin, "Jonathan" connects the painting to the poem The Bard written by by Thomas Gray in 1755. Inspired by a Welsh tradition that said that Edward I had put to death any bards he found, to extinguish Welsh culture; the poem depicts the escape of a single bard:
· · ...
· · On a rock, whose haughty brow
· · Frowns o'er cold Conway's foaming flood,
· · Robed in the sable garb of woe
· · With haggard eyes the Poet stood;
· · ...
· · A Voice, as of the Cherub-Choir,
· · Gales from blooming Eden bear;
· · And distant warblings lessen on my ear,
· · That lost in long futurity expire.
· · Fond impious Man, think'st thou, yon sanguine cloud,
· · Rais'd by thy breath, has quench'd the Orb of day?
· · To-morrow he repairs the golden flood,
· · And warms the nations with redoubled ray.
· · "Enough for me: With joy I see
· · The different doom our Fates assign.
· · Be thine Despair, and scept'red Care,
· · To triumph, and to die, are mine."
· · He spoke, and headlong from the mountain's height
· · Deep in the roaring tide he plung'd to endless night.
· · ...

I think that there are allusions to "Cherubic Songs by night from neighbouring Hills" in Milton's Paradise Lost not only in Gray's ode, but also in Carroll's poem. When I visited Yale Center of British art, they allowed photography on the top floor, without
flash of course.