The Bellman and Father Time Inspiration by Reinterpretation Anne Hale Mrs. Hoskins The Broker's and the Monk's Nose William III, Religion and Liberty, Care and Hope Weeds turned Horses (BW) Monster Face Doré (1863), Holiday (1876), Doré (1866) Holiday and Gheeraerts I Henry Holiday alluding to John Martin A Nose Job Billiard-Marker & Henry George Liddell Gnarly Monstrance Bellmen From Doré's Root to Holiday's Rat The Baker's 42 Boxes Bankersnatched by the Bandersnatch On the Road Again Goodnight, Sweet Prince Through the Briars, through the Brambles How to train a tiger Mighty the Midget He blew and he blew and he blew Neuman, Butcher, Jowett Hidden Carrol The Snark in your Dreams Ditchley Snark Ditchley Snark IT WAS A BOOJUM While he rattled a couple of bones While he rattled a couple of bones The Banker's Nose and Spectacles The Bellman and Sir Henry Lee Star and Tail Kerchiefs and other shapes Holiday - Millais - Anonymous - Galle From Doré's Root to Holiday's Rat The Bandersnatch fled as the others appeared Holiday - Millais - Anonymous - Galle 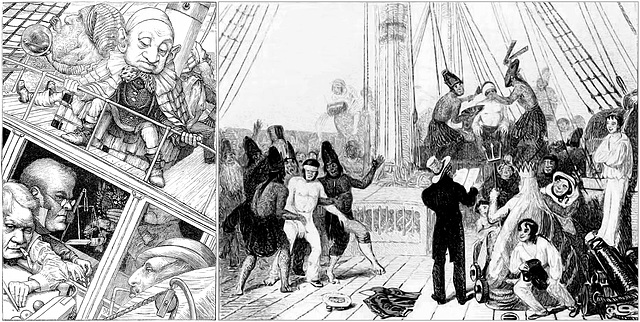 "A sailing ship: the brig H. M. S. Beagle. It is commanded by the bigoted Captain Robert Fitz Roy. The year is 1831. On board, a brain explosion. With a delay of about two centuries of Physics, it is shattered by the the Galileo of Biology. The following stages: In 1838 the theory of natural selection was completed. In 1859 comes the Origin of Species.
· · Fade-over.
· · When it returns into the scene, it is still a ship. A sailing ship, of course. The Beagle took to the sea again? The year is 1874: Darwin is still alive, well and chatty." (Adriano Orefice)


Images:
[left]: Illustration "He had wholly forgotten his name" by Henry Holiday to Lewis Carroll's The Hunting of the Snark (1876)
[right]: "Crossing the Line" (1839), redrawn (2013) based on a print by Thomas Landseer, after Augustus Earle. The print you will find in Robert Fitz-Roy's Narrative of the surveying voyages of HMS Adventure and Beagle, Vol II (1839).


This comparison is related to my assumption that Lewis Carroll's and Henry Holiday's The Hunting of the Snark at least partially has been inspired by Charles Darwin's explorational Beagle voyage.