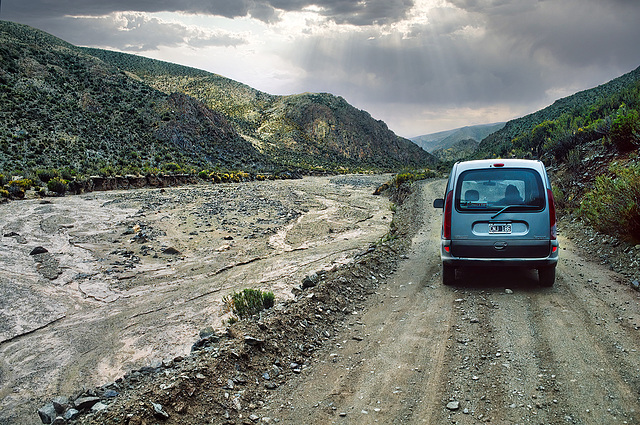 RN40 is with 5301 km the longest route in Argentina and one of the longest in the world alongside such routes as US Route 66, Canada's Trans-Canada Highway, and Australia's Stuart Highway. At its traditional southern end near the city of Río Gallegos, it starts at sea level. It then crosses 20 national parks, 18 major rivers, and 27 passes in the Andes. Route 40's highest point is with 4972 m (16404 ft) the pass "Abra del Acay" in Salta Province. This image (elevation about 4100 m) shows our first contact with this road, first driving west from San Antonio de los Cobres and then north to a famous viaduct of the "tren de las nubes".

We intended to drive south from this viaduct across the 4972 m high pass, which is actually the highest drivable road point outside of Asia. But the weather was against us, the pass was closed and we had to drive back all the way down to Salta, using again Ruta 51. We should have asked for more information probably. Later on the journey we recognized, "closed" can also mean, they don't want bloody tourists on the road ;-)

What a wonderful wild landscape and a great sky! It must have been disappointing to have to turn back, whether it was because the road was actually closed or because Grockles were unwelcome!!
2 months ago. | Permalink

It speaks truly by its image, the note is valuable to understand one small bit of the all thing.
And then I "woke up" and thought : So what for this fashion of these Super Four Whell Jeeps delivering well above 220 HP with AC and SatNav that run everywhere on our cities and highways ?
8 weeks ago. | Permalink
Berny club
has replied to J. Gafarot club

I agree. But to be honest, it felt not very safe with this Kangoo sometimes ;-)
8 weeks ago. | Permalink

A nicely composed shot with a superb sky!

I love the alternative definition of the word "closed" :-)))
8 weeks ago. | Permalink

Rugged dramatic landscape beautifully photographed. Well worth the trip even if you had to turn back!
7 weeks ago. | Permalink