next >
< previous
/
Close
Albums Albums in this folder Album Photos Add a comment Most appreciated Most viewed Most commented
Macro Moths in the smaller families that we've recorded here in Cornwall, covering: 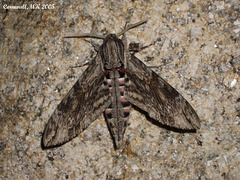 Sphingidae Sphinginae Wingspan: 110mm. This large prolifically migrant moth usually comes into the UK in the Autumn months, and is often recorded along the coastal regions of Cornwall from September and October. On good years, earlier female moths may well lay eggs on the wild Convolvulus creeper, resulting in reports of caterpillars being found a few months afterwards. However, it appears that the pupal stage is unlikely to survive our cold winters on their own. 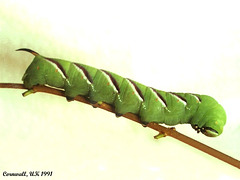 Sphingidae, Sphinginae Final Length: 100mm. This fairly common moth is the largest indigenous species for the UK, and the caterpillar can usually reach 100mm before pupation. The caterpillar is quite a colourful insect, which has composite side stripes consisting of white, purple and black colours. 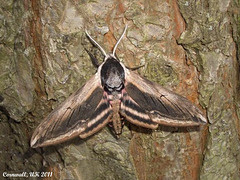 Sphingidae, Sphinginae Wingspan: 110mm. This large moth, when at rest, is quite cryptic, but will put on a vigorous defensive display if disturbed, revealing its pink hind-wings and rocking threateningly as in the above picture. Usually occurring regularly every year, the bad weather over the last few years seems to have reduced the numbers seen. Hopefully, this will recover soon. 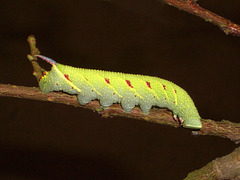 Sphingidae Smerinthinae Final Length: 60mm. A medium-sized Hawkmoth, quite common where-ever their food-plants of Lime Trees (Tilia species) occur. This picture was inadvertently labelled as an Eyed Hawkmoth Caterpillar originally during compilation of the pictures to upload. 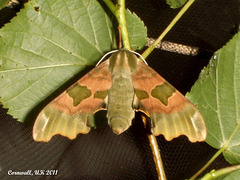 Sphingidae Smerinthinae Wingspan: 80mm. This pretty medium sized moth is quite variable in the adult stage, often being a mixture of dark green and brick red. The mid-fore-wing spots, can vary in size from being joined together to form a band, to being so small as to almost be missing. They generally occur around urban park land where-ever Lime Trees (Tilia species) occur. 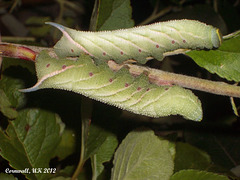 Sphingidae Smerinthinae Wingspan: 88mm. A common UK Hawkmoth, although cryptically marked on the visible forewings at rest, if disturbed, it reveals the false eyes on the hindwings to deter would-be predators by suddenly exposing them. 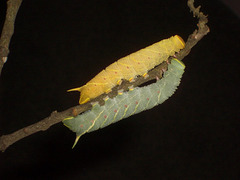 Sphingidae Smerinthinae Final Length: ~70mm. These are two different colour forms of the caterpillars for this moth. I've not seen a yellow one before, but they appeared in the brood from eggs laid in 2011 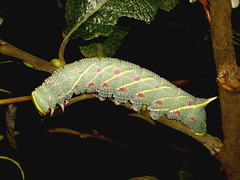 Sphingidae Smerinthinae Final Length: ~70mm. Another form of the caterpillar, which is supposed to be fairly rare. They occurred in the next generation of my culture in 2013. 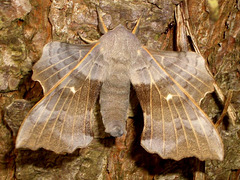 Sphingidae Smerinthinae Wingspan: 84mm. One of the commonest Sphingidae species in the UK. It occurs wherever Willows, Sallows, or Poplars are present. 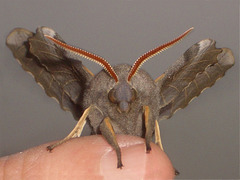 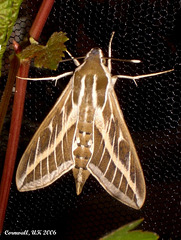 Sphingidae Macroglossinae Wingspan: 90mm. An uncommon migrant to the UK, but may be seen almost any year around May. However, single specimens have been discovered at any time if the conditions are favourable. In 2006, we had two specimens arrive at our garden trap. 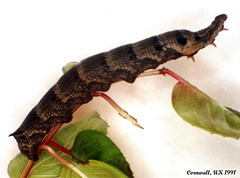 Sphingidae Macroglossinae Final Length: ~70mm The caterpillar of this species gives the source of its common name, as the shape, colour, and motion of it is reminiscent of an Elephant including the trunk, when it is searching for new food to eat (as in this picture). 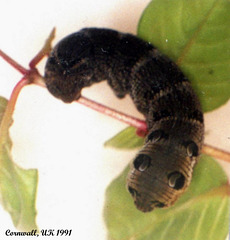 Sphingidae Macroglossinae Final Length: ~70mm Another view of the caterpillar, with the head retracted, showing the defensive posture. If disturbed, the head is pulled back into the third segment, causing the eye-spots to swell and looking somewhat like the head of a small snake.This specimen was found feeding on a garden Fuscia. 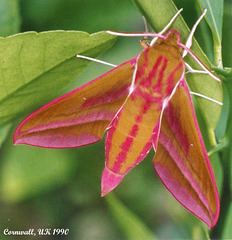 Sphingidae, Macroglossinae Wingspan: 74mm. This is one of the commonest UK Hawkmoths, and the above specimen had just emerged from the pupa, so it's colours were fresh and pristine. The colours mimic the flowers of the Rosebay Willowherb (Chamerion angustifolium), a large wild plant which grows in swathes on wild or disused ground. It is also one of the food plants for the caterpillars. 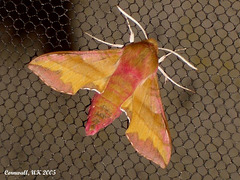 Sphingidae, Macroglossinae Wingspan: 50mm. The "baby brother" of the previous species, but no less colourful. In Cornwall, it occurs mainly in coastal regions on Sand Dunes or short-grass moorland, where the foodplants, various Bedstraws (Galium sps.) can grow. In good locations, it can occur in sizable numbers. 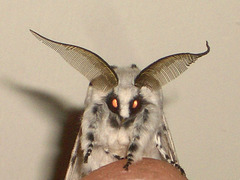 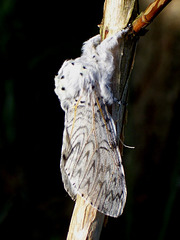 Notodontidae, Notodontinae. Wingspan: 80mm. A widespread but generally not common species in Cornwall, where-ever Salix bushes (Sallows, & Willows) occur. This species is notable for the amazingly adapted caterpillars, and the way their cocoons are made.
75 items in total
Jump to top