Latest posted Navigate on the map Photos with specific people Most appreciated Most viewed Most commented Search by keywords Search by date
See also... Tony James'
favorite photos All the photos where
Tony James appears 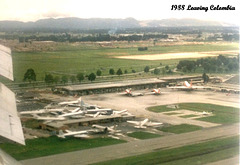 A final Airport view as we leave. South America is a good place to see old plane types, long gone but still flying past their Airworthyness rating. 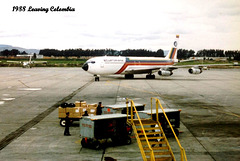 46 Our Next Stage of the Tour Arrives

Our "Air Chariot" arrives, one of three Boeing 707's in the Ecuatoriana Airline. One of our tour group who was a Plane Spotter reckoned that from its ID this plane had been previously withdrawn from service by another Airline... 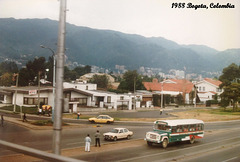 45 Back to Bogota Outskirts 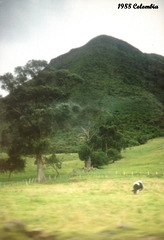 A very rural scene which could have been in Europe. 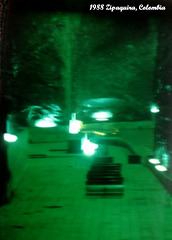 Much of the Cathedral accoutrements were carved from solid salt, some of which were interesting sculptures. 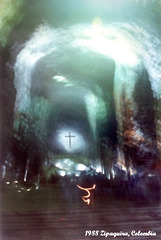 41 Finally at the Salt Cathedral

The excavated area was huge, and the lighting here very difficult to cope with using old film cameras.The reddish light squiggle near the bottom centre was someone walking around with a torch. 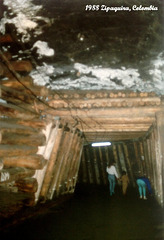 40 Near the Tunnel End

Salt became more apparent as we got deeper into the mountain. This is all the remains of Salt excavation by local Indian people in the past. 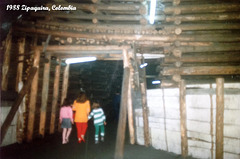 39 Heading Into The Old Salt Mine

Lighting here was fluorescent tubes strung loosely everywhere.It appeared that this place was still "under development". 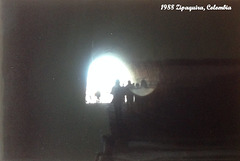 38 Going Deep Into The Mountain

We should have brought a torch for here! 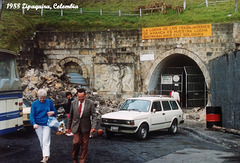 Presumably the site was still under development, judging by the debris hanging around everywhere outside the entrance tunnel. 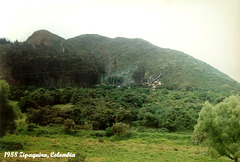 36 Next Stop Zipaquira in Sight

The second part of this trip was the the Salt Cathedral at Zipaquira, made fro an old salt mine excavation. 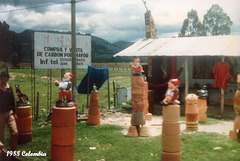 They're appearing everywhere! Looks like they are expecting a flood! 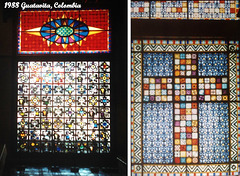 Lots of stained glass in the windows, but only as patterns, rather than early European versions which depicted Saints and Scenes. 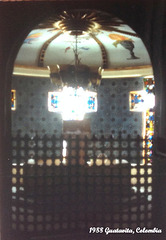 A difficult available light picture with bright windows making the inside almost in shadow. I have post processed this picture to try to equalise the exposure. 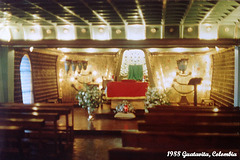 32 Inside The Modern Guatavita Church

Most of the churches we visited in South America were beautifully decorated and really interesting to visit. Out of respect to the locals, I do not like using flash in churches, so the pictures are taken with available light. 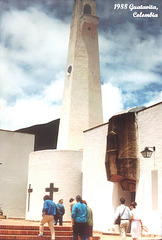 A quick visit to see the inside of the central Church. 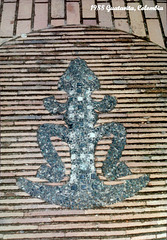 It looks like art based on indigenous Indian design.
2202 items in total
Jump to top