Latest posted Navigate on the map Photos with specific people Most appreciated Most viewed Most commented Search by keywords Search by date
See also... John Twang's
favorite photos All the photos where
John Twang appears

Lambeau Field in Green Bay! You gotta love this venue, it's filled with legends, great loyal fans and has a souvenir shop that contains anything you can put a logo on.

The Joe Louis Arena will be demolished soon. See it from across the river in Windsor while you can. 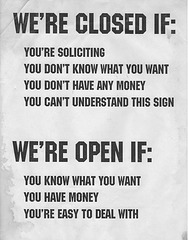 This sign appears on the door of Val Shively's Records. Great store! Located in the Philadelphia suburb of Upper Darby, Val and Chuck are two real collectors and found two of the now six records on my want list. By the way the sign is not a joke! 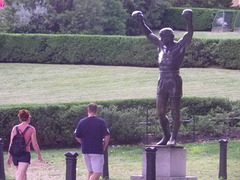 The Rocky statue was originally at the top of the 72 steps leading to the Philadelphia Museum of Art. The bronze statue, commissioned by Sylvester Stallone, is now at the bottom of the steps. Better placement for people of my generation. 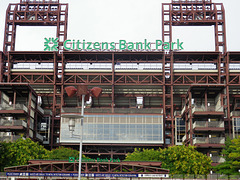 Citizen's Bank Park is the home of the MLB Phillies. This venue replaced Veteran's Stadium. January 2, 2012, CBP hosted the fifth annual NHL Winter Classic between the New York Rangers and Philadelphia Flyers before a sold put crowd of close to 57,000 fans.. 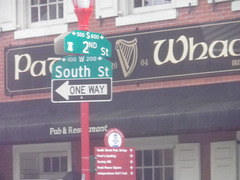 Philadelphia's South Street runs along the border of South Philly. George Thorogood and Green Day got noticed in the bars lining the street. Local group The Orlons had a 1963 hit with "South Street" 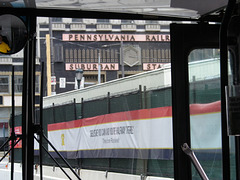 Philadelphia's "Pennsylvania Railroad" is also one of the stops on the American Board game featuring Atlantic City streets and attractions near the area. 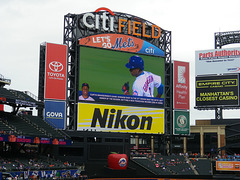 Wikipedia: "Citi Field has a capacity of 41,922. It has over 15,000 fewer seats than Shea Stadium. All the seats in the park are green – in an homage to the Polo Grounds, longtime home of the baseball Giants and the original home of the Mets – as opposed to Shea's orange, blue, red and green assortment.[27] The exterior facade is reminiscent of Ebbets Field (which was long sought by Mets owner Fred Wilpon, a Brooklyn native). 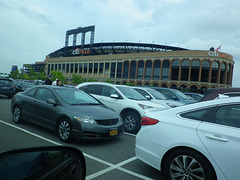 Citi Field, home of the Mets

Citi Field is located in Flushing Meadows.in Queens. Like other venues in the NYC area you have to show identification to purchase a beer ... even if you're a retired person. Common sense doesn't exist everywhere. 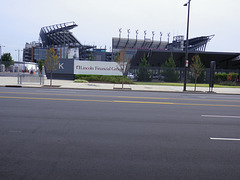 We were attending a Phillies game and noticed that three stadiums were in proximity. This is Lincoln Financial Field of the Eagles, the other was the home of hockey's Flyers and the NBA 76ers at the Wells Fargo Center. 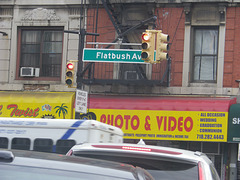 Ebbets Field was the home of the legendary Brooklyn Dodgers. We searched for two hours but despite asking people of all ages, races and genders we couldn't find the marker. As a matter of fact not one person even heard of Ebbets Field!. 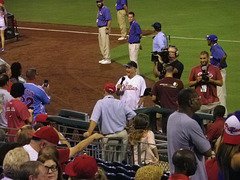 Bobby Rydell "Take Me Out To the Ball Game"

Former teen idol Bobby Rydell ("Forget Him", "Volare", "Wildwood Days" etc)singing "Take Me Out To the Ball Game: at the Phillies game. he was well received! 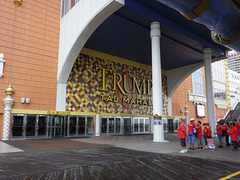 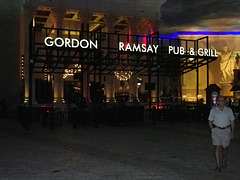 Chef Gordon Ram say's Pub and Grill at Caesar's Palace in Atlantic City. We didn't dine here because offensive language in public is frowned on by this poster. Not really when it involved an international television personality though. There are times when I'm shallow. 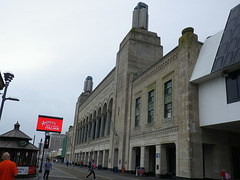 The original Atlantic City Convention Hall, Boardwalk Hall is now a U.S. Historic Landmark. Here you will find "Poseidon" the world's largest musical instrument, a pipe organ consisting of 33,000 pipes. The Miss America Pageant started at this site in 1921. 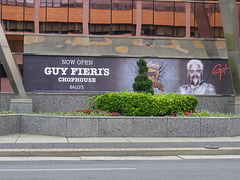 Although we didn't visit the eatery I am a fan. Somehow I don't think of "Diners, Drive-Ins and Dives" in this establishment. 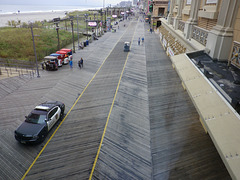 This pic makes the Boardwalk look more angular than reality but I still wouldn't want to run the marathon here. 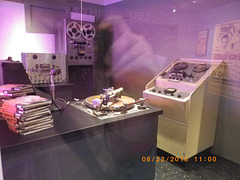