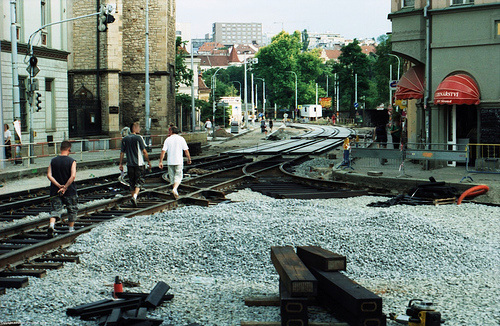 Although slab track is used in new straightaways on DPP's tram system, the turnouts in Albertov and on most of the system still use the old 19th-Century methods of construction, even down to genuine creosoted wooden ties (sleepers to the British)!!! Wooden ties are becoming rarer and rarer everywhere today, especially in Europe and Asia, and if I were to see this I would much more expect it to be in the U.S. than in the Czech Republic, but here are wooden ties, being used on the tram tracks no less, right in the middle of Prague!
Translate into English
Suggested groups:
Comments