Tasmanian Tiger also known as Tassi Tiger Tasman bridge in Hobart Suburban municipality of Hobart Salama Strahan accommodation with a Big Ben Clock Strahan coffee shop On the way from Rosebery to Queenstown Road sign in Queenstown and other towns Galley Museum Queenstown Toyshop window in Queenstown Toyshop window in Queenstown Driffield St in Queenstown West Coast Wilderness Railway Station in Queenstow… Empire Hotel in Queenstown Nostalgic train in the railway station Nostalgic steam locomotive leaving the station Old hotel house in Queenstown Up the mountains near Queenstown Mountain road from Rosebery to Queenstown In the mountains near Zeehan Landscape near Rosebery Lake Burbury On the way from London lakes to Miena In St Davids Park in Hobart Peruvian musicians at the Salamanca Market Lady handbags made from car license plates In the St Davids Park in Hobart Walkers at the Salamanca Market Entertainer and store owner at the Salamanca Marke… Local people in the St Davids Park Shopping arcade near Elisabeth Mall The very narrow KODAK house Shopping arcade Elisabeth Mall Marina in Hobart Marina in Hobart Way up to the Mount Wellington summit Panorama view from the Mount Wellington Panorama view from the Mount Wellington Scree field up the Mountain Fishing boats in the harbor Famous restaurant at the harbor dock Floating restaurant in Hobart's harbor Franklin Whrf along Hobart's harbor Rex Air, the flight connection to Tasmania Launceston 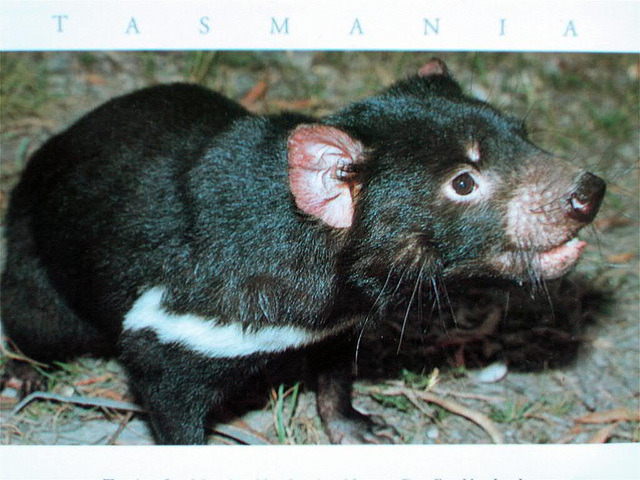 Please forgive me "stealing" this photo from a postcard. But let me explain a bit about this animal:
Local people lovingly call it "Tasi Devil", we know it better under the name of the Tasmanian Devil.
The Tasmanian devil is the largest surviving carnivorous marsupial in Australia. It has a squat and thick build, with a large head and a tail which is about half its body length. Unusually for a marsupial, its forelegs are slightly longer than its hind legs. Devils can run up to 13 km per hour for short distances. The fur is usually black, although irregular white patches on the chest and rump are common. These markings suggest that the devil is most active at dawn and dusk. These marks are thought to focus biting attacks to less important areas of the body, as fighting between devils often leads to a concentration of scars in that region. Around 16% of wild devils do not have white patches. Males are usually larger than females, having an average head and body length of 65 cm, with a 25 cm tail, and an average weight of 8 kg. Devils in western Tasmania tend to be smaller. The stocky devils have a relatively low centre of mass. Devils are fully-grown at two years of age, and few devils live longer than five years old in the wild.

But in the last years this animal suffer under a big illness, the Devil facial tumour disease (DFTD).
Its an aggressive non-viral transmissible parasitic cancer that affects Tasmanian Devils. The first "official case" was described in 1996, in Australia. In the subsequent decade the disease ravaged Tasmania's wild devils, with estimates of decline ranging from 20% to as much as a 50% of the devil population, across over 65% of the state. Affected high-density populations suffer up to 100% mortality in 12–18 months. The disease has mainly been concentrated in Tasmania's eastern half. Visible signs of DFTD begin with lesions and lumps around the mouth. These develop into cancerous tumours that may spread from the face to the entire body. The tumours interfere with feeding, and the affected animal may starve to death. At present the population has dwindled 70% since 1996.
Suggested groups:
Comments