next >
< previous
/
Close
Albums Album Photos See on the map Comments Most appreciated Most viewed Most commented
The passed years one of my most amazing journeys was a tour through Australians states Victoria and Tasmania.
I was asked why I didn't posted my captures yet by Ipernity? I did the trip in February 2006 - long time already passed.
My time working on my albums by Ipernity is limited and so many other albums I couldn't start, but this set I will not detain:
I like to start now with the breathtaking, jaw-dropping experience my wife and I made during a getaway to the natural highlight of The Twelve Apostles - here is done.
Febr. 2006 was our silver wedding celebration and the journey to Australia the "silver wedding honeymoon". We chose going out of Asia, going to visit my sister in law in Tasmania. It should get an unforgettable trip. The island Tasmania as big as Bavaria only has a bit more than half a Million inhabitants (Bavaria 12.5 Mill.) and a perfect infrastructure. We enjoyed driving 3,000 km discovering the island and seeing an amazing landscape.

In 2006 I still used my NIKON CoolPix 5000 camera, the science of digital photographic still was under the beginning, much different to use my present camera D200. The editing of the photos also were more complicated.

Come and have fun to visit photos from this dreamlike places, maybe its your next destination too.
The passed years one of my most amazing journeys was a tour through Australians states Victoria and Tasmania. I was asked why I didn't posted my captures yet by Ipernity? I did the trip in February 2006 - long time already passed. My time working on my albums by Ipernity is limited and so many other albums I couldn't start, but this set I will not detain: I like to start now with the breathtaking…  (read more) 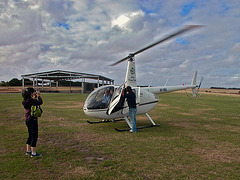 Starting to see the rocks in bird's eye view

An helicopter service company offers private flights to see the rocks in the bird's eye view. From The Twelve Apostles Heliport launch into a flight experience will not to be missed. Reasonable price for an unforgettable experience, very much cheaper than private chopper-flights e.g. in Nepal or Cambodia. 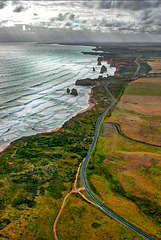 The flight with an helicopter was the unforgettable experience and a view like out a bird eye to the twelve apostles rocks. 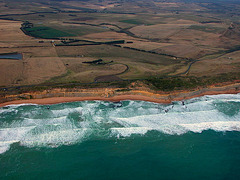 Just a few minutes before landing the chopper the pilot gave me one more turn along the south-west coast to enjoy watching the spectacular sea surf.

The coastline and The Twelve Apostles

The wild and powerful Southern Ocean that sculpts the area's limestone landscape. 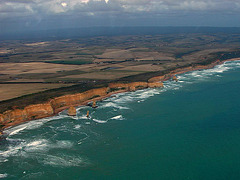 A helicopter flight here to view the Apostles from the air. 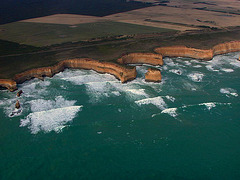 Nobody should miss an helicopter ride to get the real enjoyment of this natural wonder of the world. 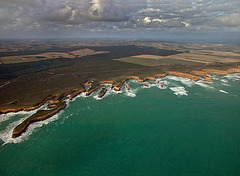 The Great Ocean Road rejoins the coast and its famous and often photographed rock formations, The Twelve Apostles. 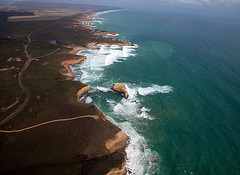 Outside 150 km from Melbourne. 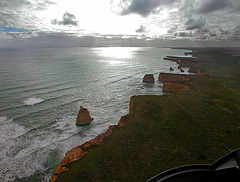 The rocks seen out the chopper screen

This part of the Victorian coastline is known as the Shipwreck Coast and is responsible for the sinking of up to eighty vessels. 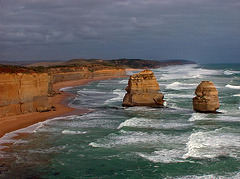 The Twelve Apostles other side

When you go along the tracks on the right hand side there are two of the rocks. The constant action of the sea on the limestone slowly wore down the rocky cliff, gradually leaving individual rocks. The cliff is still being eroded at a rate of about 2cm each year, and in the future is likely to form more 'Apostles' from the other rocky headlands that line the Victorian coastline. 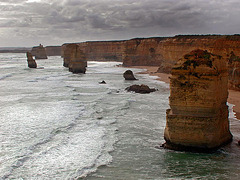 The Parks Victoria has built boardwalks, tracks, and viewing areas to ensure to get spectacular views of the Twelve Apostles. We came late in the afternoon being sure to have good light for photographing. 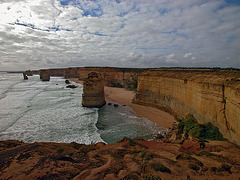 The apostles were formed by erosion: the harsh weather conditions from the Southern Ocean gradually eroded the soft limestone to form caves in the cliffs, which then became arches, which in turn collapsed; leaving rock stacks up to 45 metres high. The site was known as the Sow and Piglets until 1922 (Muttonbird Island, near Loch Ard Gorge, was the Sow, and the smaller rock stacks the Piglets); after which it was renamed to The Apostles for tourism purposes. The formation eventually became known as the Twelve Apostles, despite only ever having nine stacks. 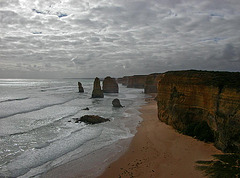 The stacks of the Twelve Apostles

The stacks are susceptible to further erosion from the waves. On 3 July 2005, a 50 metre tall stack collapsed, leaving eight remaining. On 25 September 2009, three years after our visit, it was thought that another of the stacks fell, but this was actually one of the smaller stacks of the Three Sisters formation. The rate of erosion at the base of the limestone pillars is approximately 2 cm per year. It is expected however, that due to wave action eroding the cliff face, existing headlands will become new limestone stacks in the future. 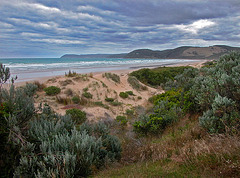 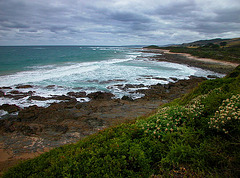 During our return to Melbourne we stopped man times to enjoy the amazing vistas to Victoria's coast, sometimes sand beaches mostly rock coast. 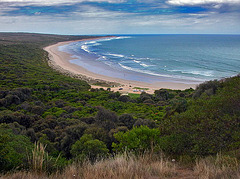 Recognised as one of the world’s most scenic drives, the Great Ocean Road follows the stunning coastline of Victoria’s south-west. The road winds along cliff tops, up to breathtaking headlands, down onto the edge of beaches, across river estuaries and through lush rainforests offering panoramic views of Bass Strait and the Southern Ocean at every turn. 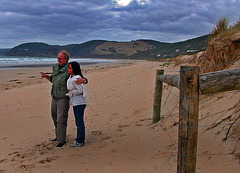 We on the beach along the Victoria's coastline

The great photographer was the famous "Mr automatic releaser". 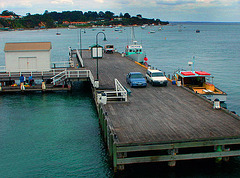 Queenscliff is a former 1880s seaside resort now known for its Victorian era heritage and tourist industry and as one of the endpoints of the Searoad ferry to Sorrento on the Mornington Peninsula.
210 items in total
Jump to top