Latest posted Navigate on the map Photos with specific people Most appreciated Most viewed Most commented Search by keywords Search by date
See also... David Dahle's
favorite photos All the photos where
David Dahle appears

This one's for Justin. This is at a school I attended as a kid. Steps 480V from the boiler house down to 208/120Y for one of the school buildings. Looks like it's run hot quite often.

Another step towards completion. I have about 10 more parts to install on two boards, then I should get the DC backplane board in next week, along with a replacement power supply board (correcting a dumb layout error).

What I've been working on lately... replicating an old piece of test equipment "just because I can". Down to a handful of parts before I measure and order standoffs needed to tie everything together. 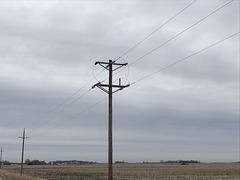 A replacement transposition structure on the Lennox to Centerville line - one of the very last 69kV lines on the system with transpositions. The transpositions are among the very last poles on the line that still have crossarms, as almost all of the poles have been retrofitted with large armless posts like the other two. This line is old enough that the company is thinking about an eventual rebuild, and has already replaced the first segment out of Lennox.

This replaced a wishbone pole where the arms were twisted very badly out of alignment from the line.

Credit: Siouxland Museums / Photo ca. 1980 of Northern States Power's North Weber plant that once sat at the base of the city's namesake falls. The quartzite section is the original 1908 Sioux Falls Light & Power Co. hydro plant, then the additions were put up by Northern States Power over the years until the 1940s, when the Lawrence plant was built east of town. Both were shut down December 31, 1972, and while I do not know when Lawrence hit the ground, I remember seeing this plant in pretty forlorn condition in the late 1980s before most of the complex was torn down in 1990, leaving only the hydro plant. The substation on the south side of the hydro plant came down in 1991, and the city has since restored the hydro building into the Falls Overlook Cafe.

A map I made last month after discussion with a newer Ipernity member, showing the south end of the 69kV line that once linked Northern States Power's Grand Forks and Fargo systems, likely as a way to meet the 'contiguous territory' requirement under the Public Utility Holding Company Act (1935 - 2005). The orange portion at the upper left is part of a downgraded segment that runs as far north as Gardner, now a Cass County Electric 12.5kV line. The pink line extending south towards the Red River substation is a guess at the alignment, as no evidence of that segment remains. From the Red River substation to what is almost certain to be the site of NSP's Fargo generating plant, there are a few snippets of remaining 69kV that have long since been absorbed into the 23.9kV distribution system. 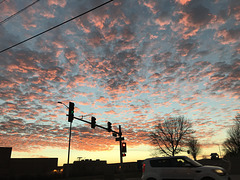 An incredible sunset I saw not long ago...

A board I turned up in my stash of electronic boards... some kind of a radio receiver I think.

This pandemic can't end soon enough if you ask me... Was getting low on essentials, so I made do with two sandwiches and some peach Nehi.

Just blown' in the breeze...

I about went off the road in amazement... that is a roll of electrical tape blowing in the wind! The next time I went through town, the pole was properly topped off with a new luminaire.

A portion of the old Cengas line passing through the James River valley towards the end of the active line. I am sure this section of line is enough of a headache the engineers at Xcel do not want to go through the hassle of rebuilding it to current standards, especially given that the town beyond this crossing has but 73 people.

The west circuit from the coop's Westhope Corner sub splitting up three ways - one 'open Y' circuit heading north, a branch heading south, and the main line continuing west through a set of pad-mount voltage regulators (behind the shelter belt). The pole in front is likely original construction from the late 1940s (note the angle-iron crossarm braces).

An ancient switch on one of the 4160V circuits in Sioux Falls when it still stood. This leg of the 4160V system had the primary neutral up on the crossarm, so NSP swung it around the switch on the second arm (note how it's braced also) - sure looked like a second circuit didn't it? This switch was the boundary between the South Sioux and Cliff Avenue 4160V substation systems. Also, after the April 2013 ice storm, the circuit heading south got a complete rebuild prior to a conversion to 13.8kV the following winter. The fall of 2016 saw this pole replaced and the northbound circuit rebuilt for 13.8kV operation as part of the final elimination of neighborhood 4160V distribution in town. 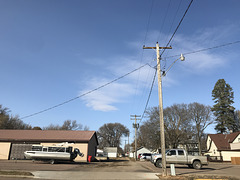 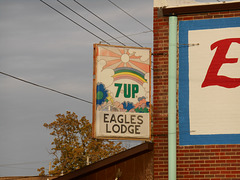 I was very pleasantly surprised to see this old 7-up sign still in the air, although likely badly faded.

Another view of the shelled-out steel alley pole line with one remaining girder frame in back. I was too disappointed to even bother getting a closeup, and I was already running late to meet up with someone in Council Bluffs. I'm thankful that the primary purpose of my trip to Creston was successful though!