The sea The sea 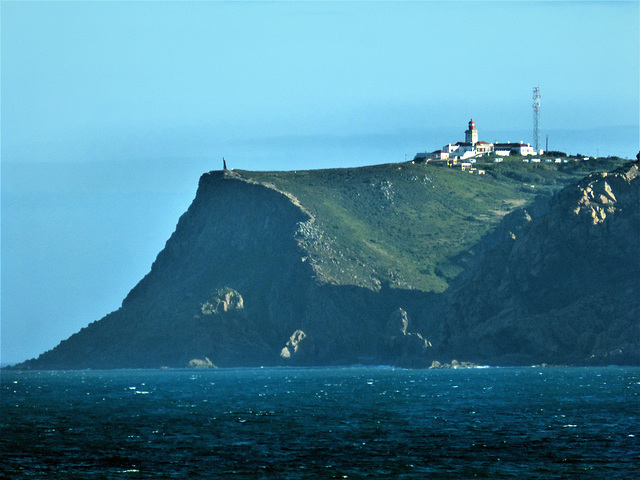 Cabo da Roca or Cape Roca is a cape which forms the westernmost point of the Sintra Mountain Range, of mainland Portugal, of continental Europe, and of the Eurasian land mass. It is situated in the municipality of Sintra.

The western coast is a mixture of sandy beaches and rocky cliff promontories: around Cabo da Roca, cliffs are more than 100 metres in height, and cut into crystalline rocks, composed of strongly folded and faulted sedimentary units.
These forms are disturbed by dikes and small beaches.
This promontory of "high" beaches is the extreme western immersion of the ancient eruptive Sintra massif, as evident from the rose-coloured granite in the north and syenite of the Ribeira do Louriçal.
Much of the vegetation on this cape is low-lying and adapted to saltwater and windy conditions.
Once home to a variety of plant life, Cabo da Roca has been overrun with the invasive plant species Carpobrotus edulis. This creeping, mat-forming plant, a member of the Aizoaceae succulent family, was introduced as ground cover by local residents several decades ago, but now covers much of the arable land on Cabo da Roca.

Nouchetdu38, RHH, goandgo, Christina Sonnenschein and 17 other people have particularly liked this photo

Zulma
Yo podría tomar fácilmente esa bajada hasta llegar al agua. Qué delicia sería amigo Jose my dear.
3 months ago. Translate | Permalink
J. Gafarot club has replied to Zulma
Dear Zulma you really want to play the little naughty girl who does whatever she wishes.
But I will wait for you down by the sea and then … we will see !
3 months ago. | Permalink

RHH club
What a wonderful location and a beautiful photo.
2 months ago. | Permalink