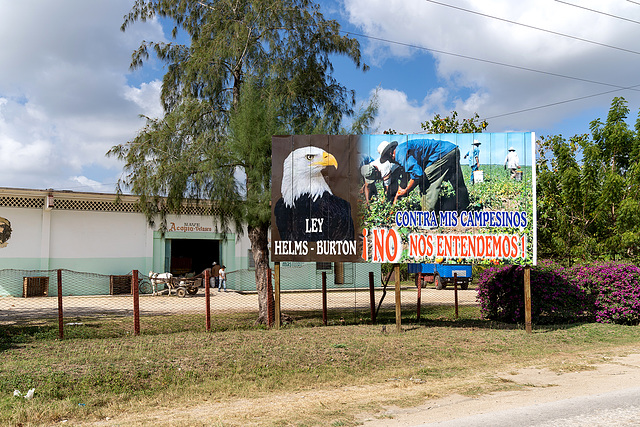 "Cuba's 1996 Freedom and Democratic Solidarity Act" (what a misleading title), also known as the "Helms-Burton Act" was enacted by Bill Clinton in March 1996 with the aim of discouraging foreign investment and internationalizing the Cuban blockade. It's beyond questions against international law.

This law codified the regulations of the U.S. economic blockade against Cuba, extended its extraterritorial scope (application to countries other than the one enacted by the law) and establishes the possibility of denying entry to the general directors of international companies (and their families) who have invested in properties "confiscated" after the Castro revolution (Title IV) into U.S. territory.

The Act entered into force in March 1996. However, the application of Title III -which gives the right to sue in U.S. territory anyone who deals with goods confiscated from Americans by the Cuban government- has been systematically suspended by the different presidents of the United States until May 2, 2019, the Donald Trump government activated without any limit, the application of Title III of the Helms-Burton Act.

This "law" is nothing but terrorism against the people of Cuba. You can find many many publications about it in the internet, almost all of it biased in one or the other direction.

"This "law" is nothing but terrorism against the people of Cuba."
I totally agree with you
Superb and current image and information, Berny
16 months ago. Edited 16 months ago. | Permalink
Berny club
has replied to J.Garcia club

It's interesting that a single nation considers it has the authority to claim international relevance for its "laws"! I agree with you entirely.
16 months ago. | Permalink
Berny club
has replied to tiabunna club

And with Trump all became even worse!
16 months ago. Translate | Permalink

Interesting summary. The Act became relevant to the UK as part of US pressure against the adoption of Huawei 5G technology. Today the US government announced that it will toe the US line.
16 months ago. | Permalink

Very interesting, and some good comments,
16 months ago. | Permalink