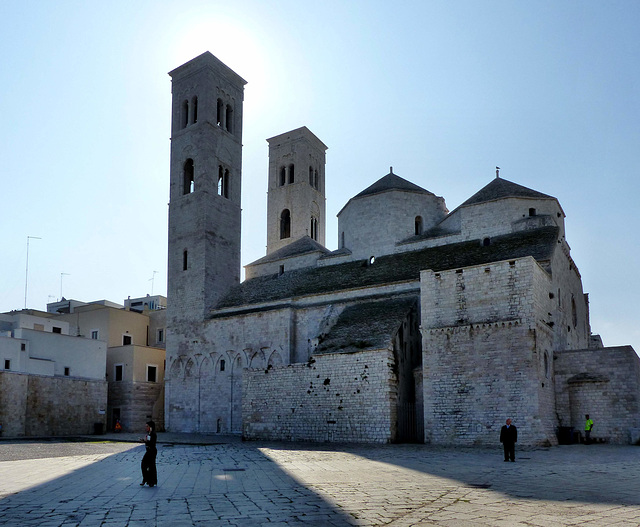 Molfetta was probably been founded by the Greeks around the 4th century BC. Later it was Roman and after the fall of the Roman Empire, it was ruled by the Goths, who reinforced the city walls in the response of raids of Saracene pirates. The settlement developed under the alternate dominion of the Byzantines and Longobards. The Normans occupied Molfetta mid 11th century. Under the Norman rule, Molfetta became, just like Bari and Brindisi, an important starting point during the period of the crusades. Hospitals got erected to care for returning crusaders and hospices to host people heading to the "Holy Land".

San Conrado (aka "Conrad of Bavaria", "Konrad von Bayern") was a son of Henry the Black, Duke of Bavaria. Conrad was a disciple of Bernard of Clairvaux and a Cistercian monk. He journeyed to the "Holy Land" with the purpose of living there as a hermit but had to return. Returning to Apulia he stopped near Bari, where he lived as a hermit.

The Duomo is a very special example of Apulian Romanesque architecture, as it is the largest of the Romanesque churches with the central nave covered with three domes.

In the beginning, the distance between the cathedral and the sea was so small, that the main entrance had to be moved to the other side, but meanwhile, the cliff is gone. The harbour got enlarged, the land around was reclaimed and now there is a wide promenade.

Outstanding towers! Splendid contrast as result of hidden back light!
17 months ago. | Permalink

Thanks, Dimas!
17 months ago. Translate | Permalink