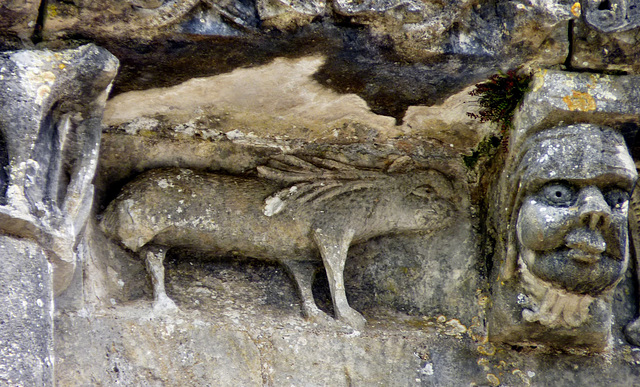 Melle was known already during Roman times, when silver and lead were mined here. The silver mines were exploited over hundreds of years, got forgotten and "rediscovered" in the 19th century. Today they are a tourist attraction. Melle was wealthy and the pilgrims, walking the Via Turonensis, passed through Melle on their way to Santiago, what brought even more money into town.

Churches were erected during the heydays of the pilgrimage- and three (!) Romanesque churches can still be found here.

Saint-Hilaire de Melle was the church of a priory, a dependency of the important Benedictian abbey in Saint-Jean-d’Angély. It was built on the bank of the Beronne river. The eastern part were built in the first half of the 12th century, while the nave and the western portals may be some decades younger.

There are more than 200 carved capitals alone in- and outside this church. They are done by different carvers or studios in a large variety of qualities.

Here are corbels from the higher area of the western facade. Inbetween a hare equipped with antlers. A very uncommon creature, probably an ancestor of the legendary wolpertinger, an hybrid only rarely seen in old Bavarian guesthouses.

That's a sort of Jackalope or Rasselbock....
Bavarian Wolpertinger got wings as well.
Cryptozoological horned critters of pet size like that are more common than "only in Bavaria". There is likely a forgotten french version...
de.wikipedia.org/wiki/Jackalope
8 years ago. | Permalink