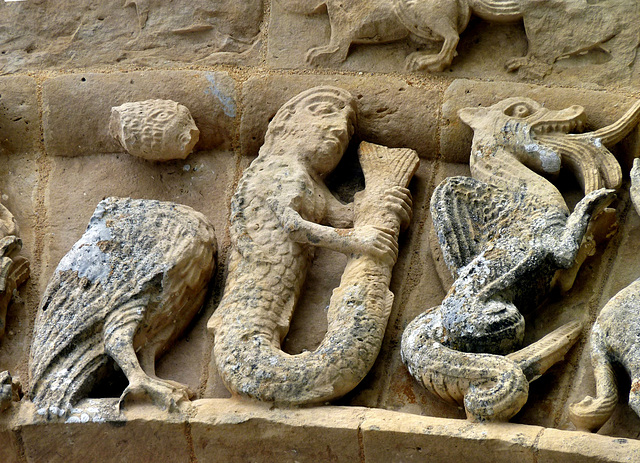 "Saint-Pierre d'Aulnay" is a church outside of Aulnay, in the center of an old graveyard. The setting has not changed for centuries. For the pilgrims of the 12th century this church was a major halt - and it still is for all the tourists...

A predecessing church „Saint-Pierre-de-la-Tour“ had been here, that, when the pilgrimage to Santiago de Compostella got more and more popular, was obviously to small, as Aulnay was conveniently situated between Poitiers and Saintes on the Via Turonensis. A new, larger church was needed, so the place was handed over to the chapter of the cathedral in Poitiers. The canons then probably planned this church, that was erected from about 1130/1140 on.

"Saint-Pierre d'Aulnay" is a gem of the "style saintongeais". For Peter Strafford ("Romanesque Churches Of France") this is "one of the best examples of late Romanesque architecture in what used to be Aquitaine".

The most outer archivolt is the most spectacular one. So far the icons were somehow in an expectable "christian tradition" (Elders, Saints), but here mythical beasts and fantastic hybrid creatures come to life. Some of these chimerae probably derive from medieval Bestiary, while others seem to come straight from a drug related nightmare.

A bird (having lost neck and beak), a very skinny unicaudal mermaid and a fire-spitting, winged dragon line up. It looks a bit like the preparation for a "polonaise", often danced in carnival parties.
Suggested groups:
Comments