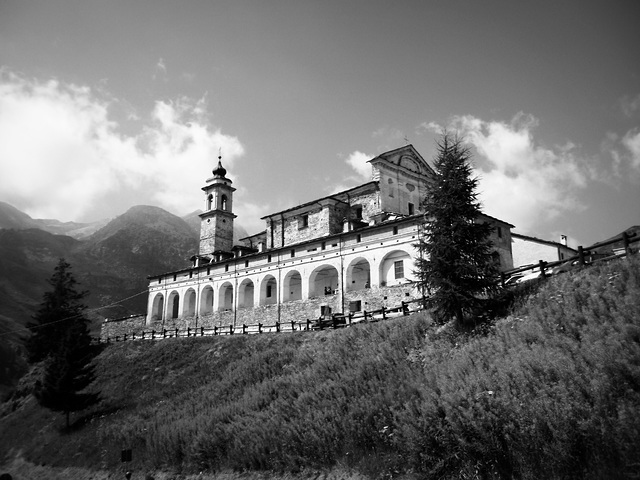 Saint Magnus of Cuneo (Italian: San Magno) is venerated as a member of the legendary Theban Legion. The centre of his cult is situated at the mountain sanctuary known as the Santuario di San Magno, in the Valle Grana, Castelmagno, in the province of Cuneo.
Local tradition makes him a soldier of the Theban Legion, which had been commanded by Saint Maurice. The Legion, according to tradition, was largely massacred in 286 AD, but Magnus fled to the mountains of Piedmont, preaching the Christian religion in the Alps.[1] He was eventually martyred and buried in the spot now occupied by the Santuario di San Magno. The church, however, may have occupied a spot once dedicated to the Roman god Mars. The current church was built between 1704 and 1716, in Piedmontese Baroque style, though its interior still preserves frescoes of the 15th and 16th centuries.

Explored
Do not use any of my images on websites, blogs or other media without my explicit written permission.
All rights reserved - Copyright © Nora Caracci

What a beautiful building and what a spectacular location!
7 years ago. | Permalink

Thanks for the visit and nice to see you around again.
7 years ago. | Permalink

Have a great day.
7 years ago. | Permalink

Trust you are well and thanks for the invitation.
7 years ago. | Permalink

Impressive architecture in such a marvelous setting!
7 years ago. | Permalink

Beautiful work, Nora!
Thanks for your visit!
7 years ago. | Permalink

What a wonderful b/w image.
3 years ago. | Permalink

Thank you for posting your beautiful image in the group.
www.ipernity.com/group/the.little.pond
2 years ago. | Permalink