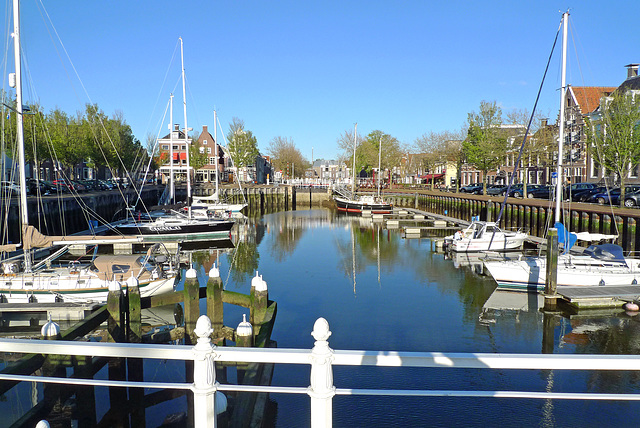 In 1565 the city council of Harlingen received permission from Philips II to expand the city on the north side. This mainly concerned the widening of the northern canal to Noorderhaven (Northern Harbour) and the planned neighbourhood to the north of it. These activities were completed in the years 1579-1580 and Harlingen had approximately tripled in size.

This tidal port accommodated many vessels that came from the Frisian hinterland and was connected to the sea. The port became a popular place to live for wealthy citizens and still has many monumental houses today. Warehouses were also built along the water. Some names of the warehouses recall the destinations of the merchants, such as Poland, Russia, Java, and Sumatra. In 1730, town architect H.J. Norel started with the construction of the new town hall, which is also located along the Noorderhaven .

Günter Klaus, Valeriane ♫ ♫ ♫¨*, , Maria Lovasz and 59 other people have particularly liked this photo

Suggested groups:
52 comments - The latest ones

A lovely looking place Jaap...............you can tell by the moored boats that this is probably a wealthy area..........they don't come cheap! I like the buildings and architcture and everything seems clean and well looked after!

A super series of photos and a great narrative!
3 months ago. | Permalink

That's a lovely scene Jaap with most uncommon blue skies. Holland is one of the few places that seems to share our wet weather. Harlingen looks a place well worth visiting. Thanks for sharing.

That's a beautiful marina and beautifully photographed, too.
3 months ago. | Permalink

I would imagine it still has many wealthy residents, a lovely place
3 months ago. | Permalink

Fantastic images of this lovely city!
All details are superb, Jaap!
Many thanks for the interesting information,too!
Through the images and notes I get to know better your country and history!
3 months ago. | Permalink

It must be nice to live in this beautiful place!
3 months ago. | Permalink

Interesting information and a great series of images, Jaap. There certainly are some lovely old buildings.
3 months ago. | Permalink

A beautiful city and a great series!
3 months ago. | Permalink

Lovely capture of the canal.
3 months ago. | Permalink

This water colour reminds me of Amsterdam...
Many years ago I went there for the first time, in a MINI, coming from Basel, just to see a remarkable Exibition of Rembrandt with his works from all over the world, between 68 and the seventies I can not remember now
I was very much affraid of those bycicles with so many knees passing outside the window during my way in town for it was rush hour to go to work.
Never ever could I forget it, the civilised way they drove past...
3 months ago. | Permalink
Jaap van 't Veen club
has replied to J. Gafarot club

No wonder you saw 'some' bycicles as we have 23 millions of them in the Netherlands.
3 months ago. | Permalink

So blue and sunny and inviting Jaap. A beautiful series of images. I particularly like the main image - I could spend hours wandering around her. It looks so peaceful
3 months ago. | Permalink

Water, magical in any photo, and which so beautifully embellishes this lovely town. Your photos show it in all its charms. Very nice, really.
3 months ago. | Permalink

what a lovely view !
3 months ago. | Permalink