A breathtaking landscape A baby Tree Swallow about to be banded A Swallowtail's tails Thoughts of anything cold 12 baby Tree Swallows! One busy log Dad on the pylon Western Kingbird Into the sun Little hearts in a row Vesper Sparrow I saw a Sora Driving in a sea of gold White-faced Ibis - very rare in Alberta Taking a good look Eared Grebe with young one A splash of colour European Starling juvenile Majestic Castle Mountain Oh, so cute Erosion through the ages Love those hairy bracts Curious Muskrat Swainson's Hawk Blue in the shade In the Badlands A Snipe from last year Good friends Indian Paintbrush Love those ears Mother Nature at her best A beautiful display of Elephant's Head Cedar Waxwing Like scoops of strawberry & peach ice-cream Snacking on grass Dandelion bokeh Blowing in the wind Throat-tickling supper Canada Violet The perfection of Mother Nature Showy lady's-slipper Brewer's Blackbird with food for his babies Where Dinosaurs used to roam A splash of colour Soon to crumble

Delicate flower of the Prickly Pear 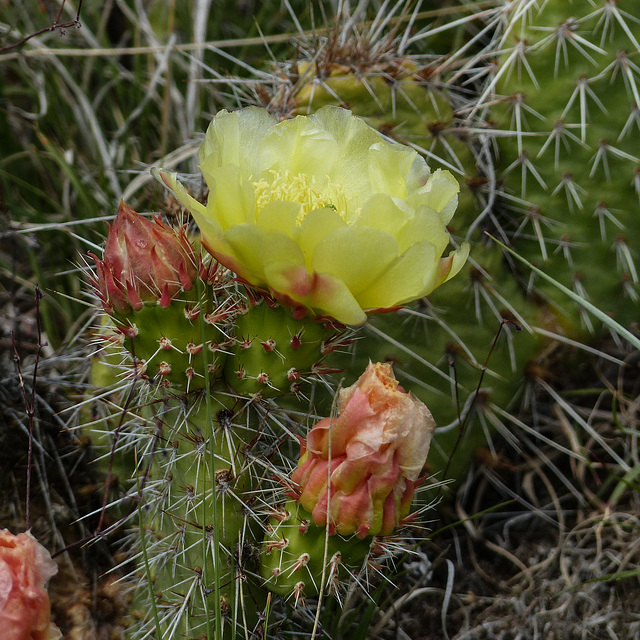 We were so happy to come across several Prickly Pear Cacti in bloom on Sunday, 22 June 2014. They tend to be surrounded by grasses that make the cacti rather difficult to photograph. They are beautiful flowers - the petals have a delicate look about them, in contrast to the long, very sharp spines.

Two days ago (22 June 2014), I was up at 4:00 a.m., to get ready for a long day trip east of Calgary, to Dinosaur Provincial Park. I had only ever once been there before, that I can remember, and it must have been 30+ years ago, so yesterday's bus trip was an absolute treat. 46 people went on this annual outing and when we arrived, we split into two groups. One half went on a mini bus tour in the morning to an area of the park that is kept closed to people in order to protect the landscape. The other half took this tour in the afternoon. The rest of the day, we could go on a walk along one of the trails in the park that are open to the public.

I was in the group that walked in the morning. We went on the Cottonwoods Trail, that eventually led to the river - a long walk that was much further than I expected! We saw very few birds, the main one being a Yellow Warbler that had its beak full of soft, white "down" from a Cottonwood tree. When we were almost back at the starting point, a Nighthawk was spotted lying on a very high branch. Well done, Shirley, for spotting this bird that was very difficult to see! A real thrill for me, as I had always wanted to see a perched Nighthawk! I saw three of them flying over the Bow River and over our heads in Bow Valley Provincial Park just a few years ago, but no chance for a photo.

Our mini bus tour in one of the Park's buses in the afternoon took us through some spectacular scenery. This photo was taken at one of the stops we made.

We had great weather, which was very lucky, as we had had rain for quite a few days before. When wet, the Bentonite clay becomes treacherously slippery, so we did not have to experience that, though in a few places we could feel our feet slipping.

I got back home around 6:30 p.m., barely able to move an inch, but it was definitely worth it. Thanks so much, Lynne, for organizing such an enjoyable trip to this fascinating area! A lot of work goes into organizing an event like this and it was much appreciated! Thanks, too, to friends Val and Wendy who took turns to sit by me for the long 2 1/2 hour journey out there and back! Great to catch up with both of you!

"Dinosaur Provincial Park is world famous for its dinosaur fossil finds. So much so that UNESCO designated it a World Heritage Site in 1979. A mind-boggling number of species have been found here - 40 and counting - but what really puts it over the top is that the bonebeds have yielded more than 300 specimens, which grace museums around the world. The park has also been designated a Natural Preserve to protect the extensive fossil fields and the valley’s fragile environment, an complicated mix of badlands and cottonwood river habitat."