Majestic Castle Mountain Oh, so cute Erosion through the ages Love those hairy bracts Curious Muskrat A fancy outhouse door Wilson's Snipe - what a beauty Small, orange butterfly Some like wood, others like metal Tiny Bishop's Cap seeds Birds on a wire Twinflower / Linnaea borealis Like a giant sandcastle Juvenile European Starling Beetle on Cow Parsnip Monarch beauty McDougall Church Gaillardia against weathered wood I'm in awe, no matter how many I see Rev. George McDougall Just playing .... Come into my parlour, said the spider to the (butt… Middle Lake, Bow Valley Provincial Park A splash of colour Eared Grebe with young one Taking a good look White-faced Ibis - very rare in Alberta Driving in a sea of gold I saw a Sora Vesper Sparrow Little hearts in a row Into the sun Western Kingbird Dad on the pylon One busy log 12 baby Tree Swallows! Thoughts of anything cold A Swallowtail's tails A baby Tree Swallow about to be banded A breathtaking landscape Delicate flower of the Prickly Pear Swainson's Hawk Blue in the shade In the Badlands A Snipe from last year 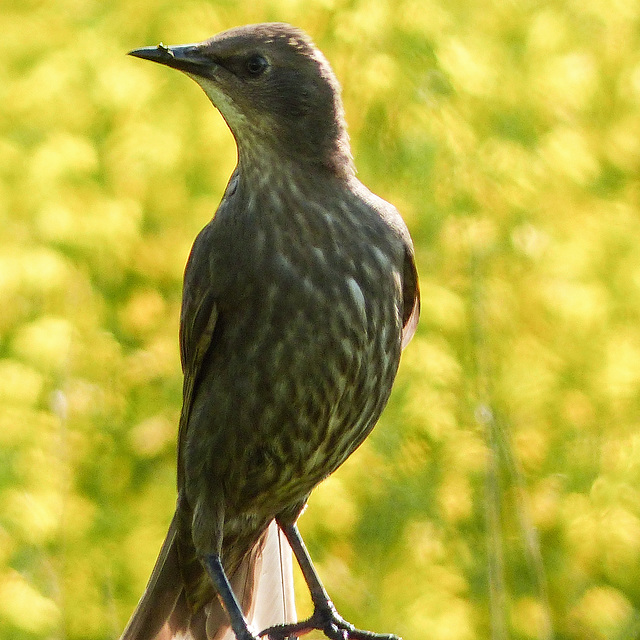 This (blurry!) bird was seen on 12 July 2014, when I spent a few hours driving the backroads SE of Calgary, in the Frank Lake area. It's so unusual for me to see and photograph a bird that I don't recognize, meaning that I don't see a lot of less usual birds, but I saw two that day (the other turned out to be a Vesper Sparrow). If anyone can tell me the ID of the bird in my photo, that would be greatly appreciated! The background was a colourful field of Canola : )

Thanks to Jack Hayden who identified this as a juvenile European Starling. I don't think I've ever seen a juvenile before, lol!

My first stop was at Frank Lake, where I saw a few more Eared Grebes with their quite large "babies". The light was really bad, so it was impossible to get photos that showed colour and details. Saw Soras again - love these little guys, they are so cute. A few very distant White-faced Ibis, but I lucked out later, finding a lone Ibis at a slough somewhere around the lake.