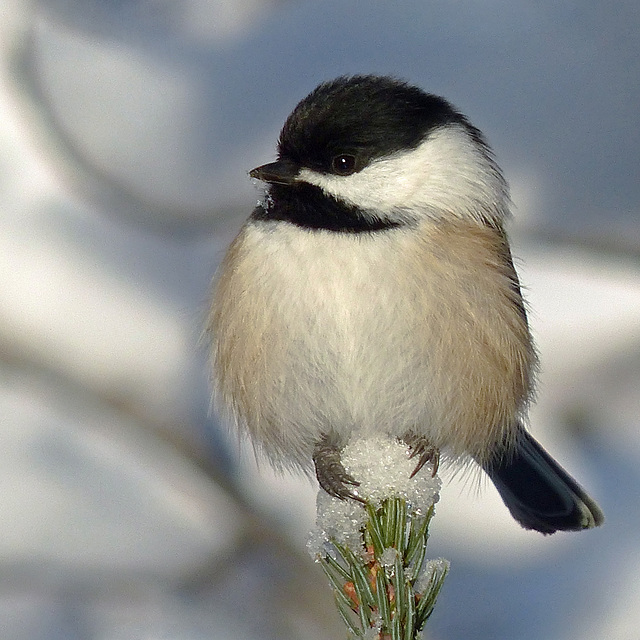 We are seeing so few birds and so few species at the moment, when we go on our birding walks. There are no cones on many of the coniferous trees, meaning that there will be no food for birds such as Crossbills this winter, and birds such as Redpolls will be either non-existant or very low in numbers. It's not expected to be a good winter for Snowy Owls, either. That's why I say "Thank heavens for Chickadees"!! They are there to greet us, no matter what! Such tough little guys, though they are always only 24 hours away from death if they can't get enough fat stored into their body to last overnight. This was a lucky shot, taken through the snow-laden trees somewhere between Bebo Grove and Shannon Terrace in Fish Creek Park, on 29 October 2013. It makes you wonder what kind of numbers will be recorded for each species during the upcoming Christmas Bird Counts, within the city, but especially in surrounding areas such as High River, Drumheller and Cochrane. en.wikipedia.org/wiki/Black-capped_Chickadee www.allaboutbirds.org/guide/Black-Capped_Chickadee/id www.flickr.com/photos/annkelliott/10611446056 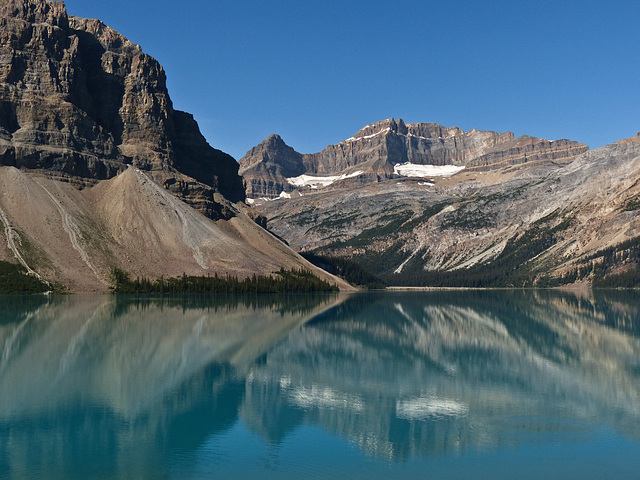 A beautiful place to reflect

I am SO tired (but happy tired!) after a wonderful day in the mountains today! I don't get out there very often at all, and certainly not as far as we went today, so it was an absolute treat! Friend Sandy had found an interesting Liverwort there very recently and wanted to go back to see it at a different stage, hoping it would make ID a little clearer. She asked if I wanted to go with her - ha, yes, you bet! We went past Banff and Lake Louise, as far as Bow Lake (seen in my photo) along Highway 93. They do say that this scenic highway is the most beautiful in the world, and it's easy to believe. I had jokingly said to Sandy when we left Calgary, that what I would really like, please, was blue sky to start with it, then a few puffy white clouds and then maybe even a touch of gey with the white - and that's exactly what we got (plus some rain on the drive back to Calgary). www.flickr.com/photos/annkelliott/9484933371 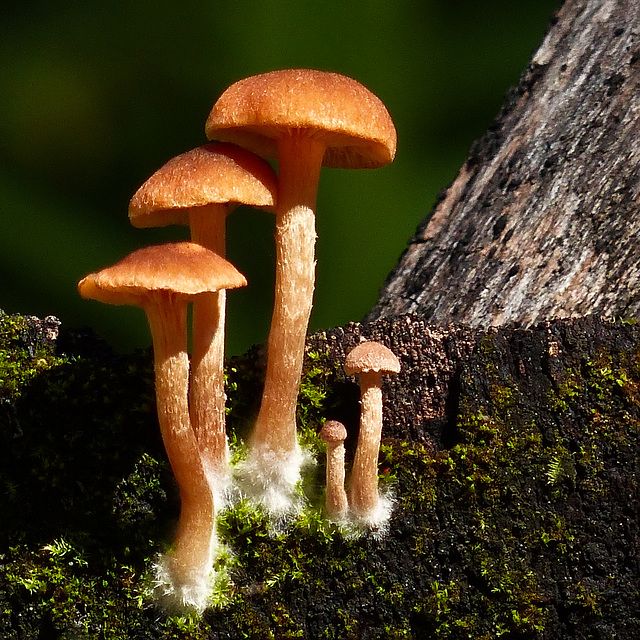 After a pretty much fruitless search for fungi on 16 July 2013 at Brown-Lowery Provincial Park, I finally found this tiny group on my way back to the parking lot. The cluster was perhaps an inch and a half tall, and I was determined that I'd get at least one photo that was sharp enough : ) August is supposedly the peak of the fungi season here and I really should get myself out there to have another look. 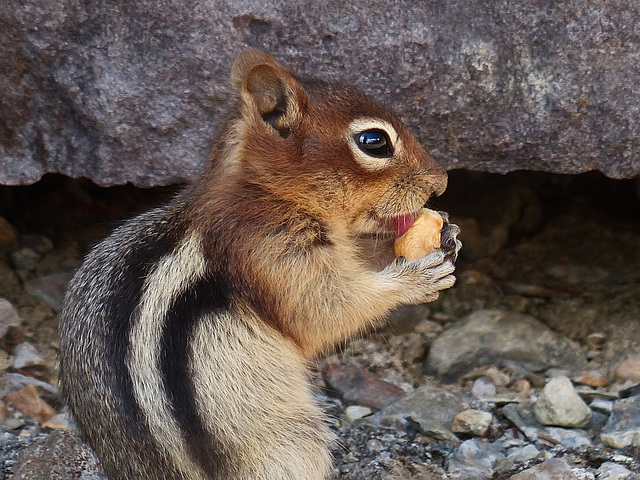 Such a cute little guy

On 10 August 2013, I went with friend Sandy to Bow Lake, in Banff National Park. It is located along Highway 93, the Icefields Parkway, said to be the most beautiful, scenic road in the world. She had seen a tiny Liverwort (non-vascular plant) maybe a week earlier on a different trip and wanted to go back to check it at a later stage, and asked if I'd like to go with her. How lucky I am! She had hoped that it might be a particular rare species, but as it turned out, it wasn't. Still an interesting species to add to the list of flora and fauna for the area. We walked very slowly along the Bow Glacier Trail, which runs along the right hand edge of the lake, searching for anything of interest and beauty. We went as far as the second rock fall, but didn't hike up to the Bow Glacier Falls. At the first rock fall, we were entertained, while having lunch, by several of these small Golden-mantled Ground Squirrels. They look rather similar to a Chipmunk and are very fast-moving animals, ha. They love a rocky mountain slope for their habitat. en.wikipedia.org/wiki/Golden-mantled_ground_squirrel 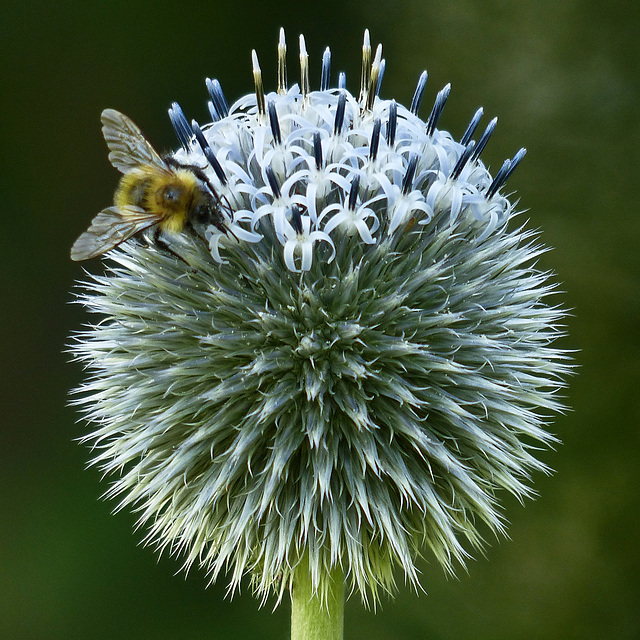 I love photographing these gorgeous Globe Thistles at any stage. This one was growing at the Reader Rock Garden on 14 August 2013. In Calgary, we have seen them growing wild at one of the natural areas (can't think of the name of the place, as it's not a place we normally go to). Not sure, but I believe this is Echinops ritro. Yesterday, 24 August 2013, four of us went west of Calgary, to the West Bragg Creek area, in Kananaskis, for a fungus foray. We managed to find a few interesting and photogenic mushrooms. With so many places either still closed or totally devastated, outings and walks since the Alberta Flood of the Century in June have had to be cancelled. Our outing yesterday was doubly delightful, after we've been so limited the last couple of months. Thanks for leading us, Karel! After this walk, I was so close to the Elbow Falls Trail (highway 66), that, on the spur of the moment, I turned right instead of left and headed off in the direction of Forgetmenot Pond. This mountainous road is the only one I will drive, so it always feels good to get out there. The other week, I had tried, but the road was closed, due to flood damage, past Maclean Pond. Yesterday, the road was open, but there was a long wait at a temporary traffic light just past Maclean Pond, where the bridge was still standing, but the embankments had been totally washed away. What destruction! Also called in at Allen Bill Pond - now just a heap of gravel with a few water channels through it. Totally destroyed. I think half of Calgary must have had the same idea as I had, as everywhere was packed. So many cars at Elbow Falls that I decided not to bother. Forgetmenot Pond was extremely busy, too, so it was impossible to get photos without people in them. Some of the path around the lake had been washed out and a lot of the area of trees and plants near the pond were now covered in a layer of silt. The area was still looking beautiful, though, and safe to visit. I only get out there maybe twice a year, and normally I would never go on a Saturday or Sunday. www.flickr.com/photos/annkelliott/9592076266 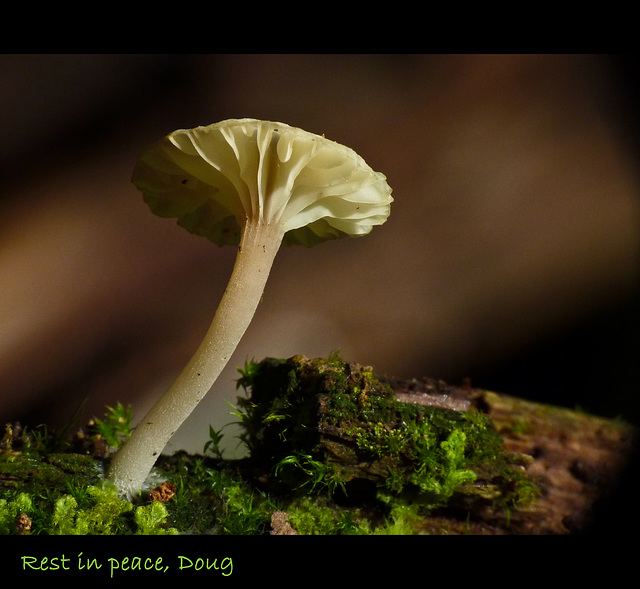 Doug, may your spirit always be free to roam

Our good friend, Doug (dougwaylett, www.flickr.com/photos/dougcwaylett/ ) passed away yesterday, following a massive heart attack. He died shortly after giving a talk on Slime Molds in the Herbarium at the University of Calgary, and then doing something that he loved to do - looking at some lichens there, which held such an interest and fascination for him. He had taught himself a tremendous amount and had, indeed, become quite an expert. He shared this expertise, along with so many wonderful photos, on Flickr, and his daughter has said that she will make sure that his photostream remains on Flickr. I am so thankful for all the many bird and botany walks and hikes the last few years, also snake monitoring - I always knew Doug would find something new or especially beautiful to show us! Sometimes, the forest would echo with a loud "Hey, Anne!" and I knew that Doug, usually down on the ground and out of sight, had found something. We are going to miss this so much, but his passion will join with our own passion and live on in each of us. Doug, may your spirit guide our footsteps and our eyes, so that we can continue to find all those priceless treasures that bring so much joy, whether they be in forest, on mountain top, or the bog we so much enjoyed. Flo, our thoughts are with you and the family - take good care of yourself. 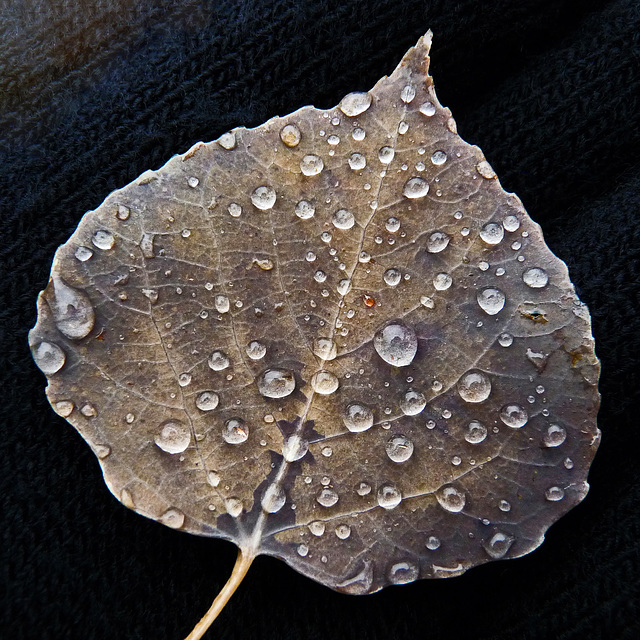 The ground was covered in wet leaves on a recent walk in South Glenmore Park. However, this was the leaf that caught my eye : ) This actually made it to Front Page (interestingness#5) on 28th October 2009 - thanks so much, EVERYONE! I never bother with this, but after a few people left comments here to let me know, I just had to check the screen shots they very kindly left for me! Much appreciated. 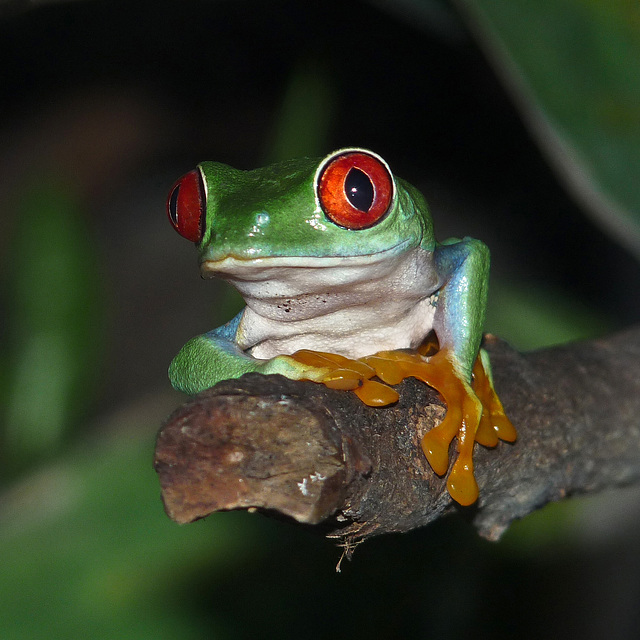 I was thrilled to bits to be told where to find these little guys at the Calgary Zoo. For so many years, I had seen photos of them, and always wished that I could see and photograph them. Had to aim at where I thought the frog was, as it was almost pitch black, and thankfully using flash worked out well. "Many scientists believe the red-eyed tree frog developed its vivid scarlet peepers to shock predators into at least briefly questioning their meal choice. These iconic rain-forest amphibians sleep by day stuck to leaf-bottoms with their eyes closed and body markings covered. When disturbed, they flash their bulging red eyes and reveal their huge, webbed orange feet and bright blue-and-yellow flanks. This technique, called startle coloration, may give a bird or snake pause, offering a precious instant for the frog to spring to safety. Red-eyed tree frogs, despite their conspicuous coloration, are not venomous. They are found in tropical lowlands from southern Mexico, throughout Central America, and in northern South America. Nocturnal carnivores, they hide in the rain forest canopy and ambush crickets, flies, and moths with their long, sticky tongues. Red-eyed tree frogs are not endangered. But their habitat is shrinking at an alarming rate, and their highly recognizable image is often used to promote the cause of saving the world's rain forests." From animals.nationalgeographic.com/animals/amphibians/red-eye... 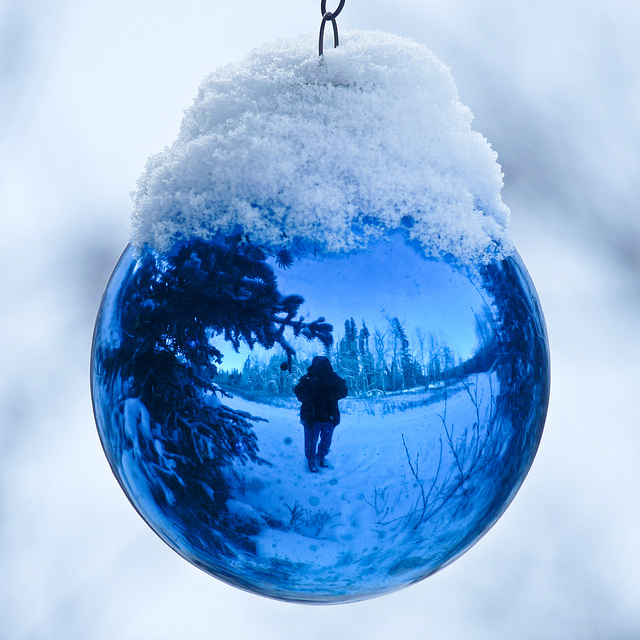 Christmas in the park

Hope that all of you who celebrate Christmas are enjoying all your preparations. Less than two weeks now, so you'd better get busy : ) On a long, cold morning's walk in the park yesterday, we came across a tree that had been decorated with coloured baubles and ornaments. Loved the blue of this bauble and the reflection of the park - couldn't figure a way to exclude myself, LOL, so there I am, wearing T-shirt, sweater, fleece jacket, my bulky winter jacket, hat, hood, long-johns, jeans, two pairs of gloves, two pairs of socks and of course, my winter boots (plus ice-grabbers)! And it was only -12C!!! It's snowing again today - the beautiful, light, fluffy kind where you can see all the individual snowflakes. Light is so poor, so no use to try and take photos. Thank you to the person who spent time adding a little colour to the white landscape: ) I hope the birds enjoy it as much as I did.
12 items in total
Jump to top