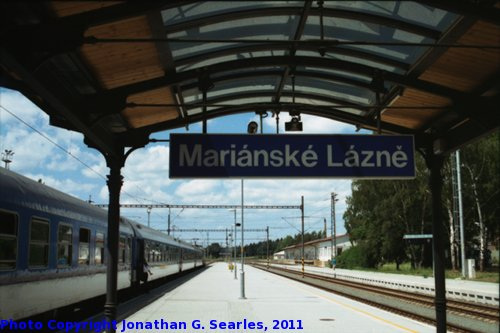 My next trip was a natural follow-up to my Karlovy Vary trip. Both Karlovy Vary, or Carlsbad, and Marianske Lazne, or Marienbad, became popular tourist destinations in the 19th Century due to their mineral water springs, which were thought to have curative effects. If you're just interested in a city trip to see interesting buildings, Marianske Lazne may be the more interesting of the two cities, as its hotels and restaurants, most of which are of late 19th-and-early-20th-Century vintage represent some of the most attractive buildings of that period. This is the train station, of course, but here we only see the canopy (admittedly steam-era), and the train that I came on.
Suggested groups:
Comments