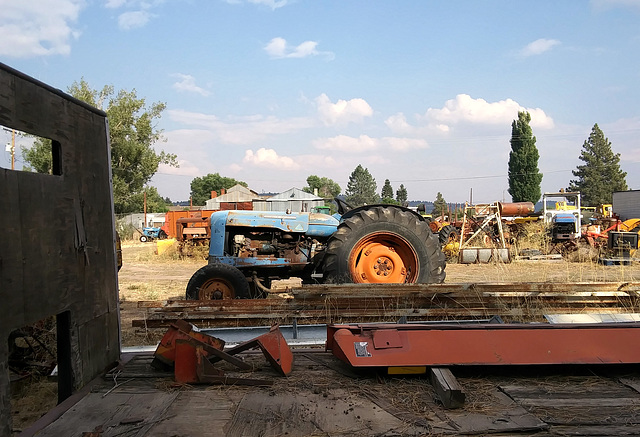 Kind of a mystery. I couldn't read the logo on the side, but blue usually means New Holland.

In consultation with Jean Paul Capdeville, I think this is a Fordson. From Wikipedia:

"The first prototypes of the new Henry Ford & Son tractor, which would later be called the Fordson, were completed in 1916. World War I was raging in Europe, and the United Kingdom, a net importer of food, was desperate for tractors in its attempt to expand its agriculture enough to feed Britain despite the great shipping disruption of the war. In 1917, the British Ministry of Munitions selected the Fordson for both importation from the U.S. and domestic U.K. production. It was thought that domestic U.K. production was preferable because so much Atlantic shipping was being sunk that exporting tractors from the U.S. would be counterproductive, as many would be lost at sea." en.wikipedia.org/wiki/Fordson The Fordson name was dropped in 1964 and the name in both the US and UK became Ford.

I found it - they look very much the same. Come to think of it, I saw an old blue Ford tractor a long time ago. I'm almost convinced this is a Ford, now. ;-)
12 months ago. | Permalink

Oui! So much alike!
12 months ago. Translate | Permalink