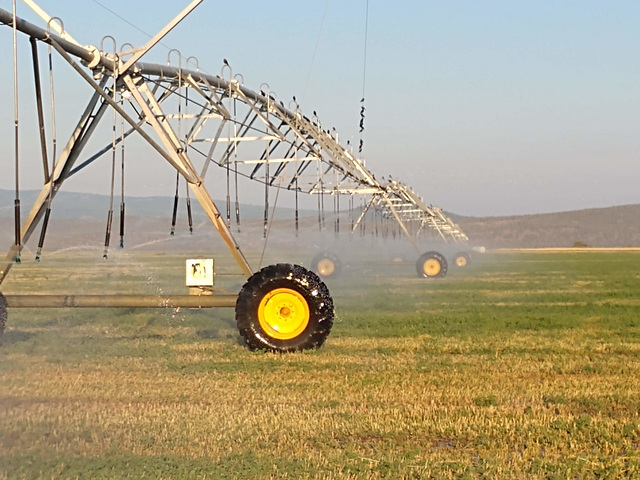 Center pivot irrigation system of an alfalfa field. Crops in very large acreage farms are typically grown in circles about 1/2 mile in diameter (800 M). This equipment costs a fortune to buy and most farmers have more than one circle to irrigate. It is common to lease rather than purchase this equipment. More about these systems: tinyurl.com/y5cbqq9n

When I was a Google Earth forum moderator, one of the top questions asked by new members was, "What are those mysterious circles in the Sahara desert?" Or, someone would post "evidence" that they were made by alien beings, were UFO landing pads, and so on. It became an inside joke with the mods and we finally had a standard link for them all to refer to rather than using energy with an original reply. (The UFO people would argue with us, anyway. Another frequent post concerned Area 51 in the Nevada Desert - even more tedious than the crop circles question. en.wikipedia.org/wiki/Area_51)

Léopold club
Pour le moins inusité comme transport agricole.
2 weeks ago. Translate | Permalink
Diane Putnam club has replied to Léopold club
Thanks! I debated with myself about whether to add to those groups. Now I did!
9 days ago. | Permalink

M♥rJ Photogr♥phy !!… club
Interesting job you had Diane..... Very impressive machinery + a great take on it too......Wishing you all the best Diana & take care !!
2 weeks ago. | Permalink
Diane Putnam club has replied to M♥rJ Photogr♥phy !!… club
Thank you, Marj. It was great! Loved it, even though it was volunteer, not paid. However, Google treated all of us to a fabulous trip every year, the best hotel, the best food and touring adventures. It was a dream. My favorite was Italy. ;-b
9 days ago. | Permalink

Keith Burton club
Amazing bit of kit................we don't see them quite so often over here! They're fascinating to watch and much bigger that you think!

Nicely captured Diane..............and solves the mystery of the huge tracks in an earlier shot of yours!
2 weeks ago. | Permalink
Diane Putnam club has replied to Keith Burton club
Yes, they're just massive. Being a fan of any kind of industrial equipment - whatever may fall into that category - I only wish they would move faster. Thank you, Keith.
9 days ago. | Permalink

Sylvain Wiart club
très visibles depuis l'avion !
2 weeks ago. Translate | Permalink
Diane Putnam club has replied to Sylvain Wiart club
Yes, they are. It's amazing how many people look at the earth from above and can't think of anything but, "ooh, that must be made by aliens!" Sheesh!
9 days ago. | Permalink

Here is something I learned recently: the Navajo do not like to be called that, because there is a lot of confusion about where the word came from. They call themselves Dine', meaning something like "we of the sky and earth. Here is an explanation of the word Dine'. www.youtube.com/watch?v=lesg9Sg-rFY (I do not understand some of what he is saying.)
9 days ago. | Permalink

Andy Rodker club
It would be like something out of 'War of the Worlds', were it not for the reassuring (somehow) yellow and black wheels!
16 hours ago. | Permalink