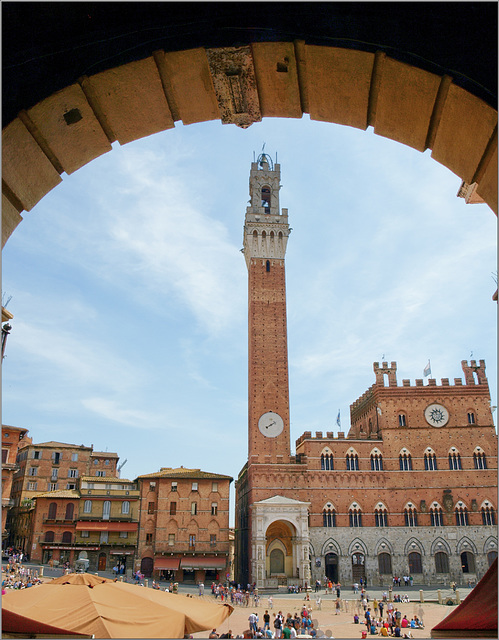 Our walk continues to the centre of this lovely city as we come to this large square. Looming 102 meters over the Piazza del Campo, the elegant, sleek tower to the Palazzo Pubblico is the third tallest in all of Italy. Built from red brick, as a symbol of its affinity to the “commoner” the tower is 87 meters tall of brick and the remaining is a white travertine, most probably to make it visually more prominent. Siena was determined to give the church and the civic authority the same “power” and reverence, so when building the tower which would eventually become the Tower of Mangia and the cathedral bell tower, there were to be of the same height as the cathedral to show that they are equal powers. In reality the bell tower of the Duomo of Siena is only 77 meters, the position of the bell tower is 10 meters higher on the hill - so when gazing upon the skyline of Siena as you are walking the via Francigena, it actually looks the same.
Enjoy full screen

Angelofruhr, Holger Hagen, fifi, Loose_Grip and 20 other people have particularly liked this photo

TOZ club
Hi Herb another super Image from Tuscany looks a beautiful place. Off up to the caravan this morning.
Regards TOZ.
4 weeks ago. | Permalink
Herb Riddle club has replied to TOZ club
Thanks Toz, it was and is no doubt still. Enjoy your newfound time in the caravan.

Keith Burton club
Fantastic framing Herb.............and the tower looks splendid against the lovely blue sky as do the rest of the buildings. I like all the red brickwork, although I hadn't realised how symbolic it was until I read your narrative.

Beautifully captured sir!
4 weeks ago. | Permalink
Herb Riddle club has replied to Keith Burton club
As said to Joe above Keith, I used to really look for good frames like this and arches were my favourites after trees. Yep, we can all learn things through our hobby here. Glad you liked it.

Rosalyn Hilborne club
Oh wow! What a fabulous view through this arch Herb! I totally agree with Keith's comments.
A beautiful shot. Cheers, Rosa.
4 weeks ago. | Permalink
Herb Riddle club has replied to Rosalyn Hilborne club
Thanks Rosa, I am beginning to see the end of this series now. Great that you enjoyed this scene.

Daniela Brocca club
So beautiful.I never have been here. In normal years there would have been the Palio the 2nd of July and later the 16th of August. As in this occasions there are thousands of people in the place this year no Palio. Is a horse race round the place.
4 weeks ago. | Permalink
Herb Riddle club has replied to Daniela Brocca club
Thanks for that Dany. I never saw any signs of horses though but then again we were only there for some hours.

Ulrich John club
A nicely framed postcard-view ! Have a good week ahead, Herb !
4 weeks ago. | Permalink

polytropos club
Great point of view!
From the top of the tower one has an excellent overview.
3 weeks ago. | Permalink
Herb Riddle club has replied to polytropos club
Ah you have been up here too then Poly. I know you went up the San Gimignano tower. We were only here some hours and so never quite had enough time to climb up here too but as you say it must have a excellent overview. -Great that you enjoyed this and indeed my Sienna series.