Latest posted Navigate on the map Photos with specific people Most appreciated Most viewed Most commented Search by keywords Search by date
See also... Herb Riddle's
favorite photos All the photos where
Herb Riddle appears 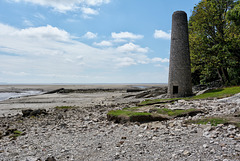 Still on the sands at Jenny Browns Point (Silverdale) we see this old chimney on the edge of the beach. A strange thing to see at such a place we thought and later research led me to this: "A nearby chimney, sometimes described as a tower, is grade II listed and has been the subject of archaeological and archival investigations.It is now believed that the chimney is most likely to be the remains of a short-lived copper mining and smelting project set up by Robert Gibson in the 1780s. He was Lord of the Manor of Yealand and incorrectly assumed he had the right to mine for copper at Cragfoot, inland from the point, on land owned by the Townleys of Leighton Hall. The copper was processed in a reverberatory furnace at Jenny Brown's Point of which the remaining chimney was part. The whole operation was abandoned in 1788 after lawsuits, and Gibson died in 1791" WiKi 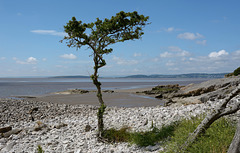 Back to the coastline of Lancashire with this view up towards Grange over Sands in Cumbria. A splendid tree here with its twisty branches. The sea and sand looks attractive but are some of the most dangerous in Britain. Enjoy full screen. 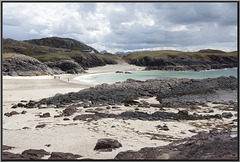 This is just beyond, further south of my last beach picture and shows Clachtolls second bay with, in fact two further beaches. We are looking south east here back to the Quinag Mountain Range. The 'Split Rocks' shown in my earlier post is just to the right of those hill-top people. (pip) See adjacent photo for its other beach. Enjoy full screen. 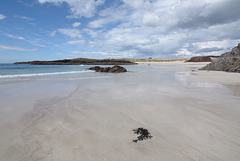 Just like its neighbour Achmelvich, Clachtoll has the most beautiful beach too. Here we see the view to the north west. The buildings and beyond are our targets on the next bit of our walking here and then its back south to yet another wonderful pair of beaches. See adjacent photo. Clickable PiP Enjoy full screen 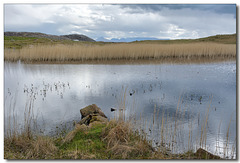 This was seen as we walked north from Clachtoll beach towards the Ancient Broch (See clickable PiP). We are looking west here towards the Quinag mountain range, a vista we were to get much closer to in the following days. ‘Quinag is an 808-m high mountain range in Sutherland in the Scottish Highlands, with an undulating series of peaks along its Y-shaped crest. The name Quinag is an anglicisation of the Gaelic name Cuinneag, a milk pail, reflecting its distinctive shape.’ Wikipedia Enjoy full size. 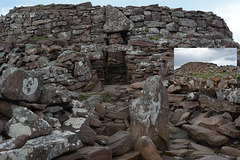 Clachtoll Broch heavily ruined, the wall stands about 2 metres tall at its highest---it would have been up to 10 metres tall originally. Enough wall still stands at the doorway to show the huge triangular lintel stone above the doorway. This type of lintel stone is a common feature of brochs. The external diameter is just over 16 metres. The interior has not been excavated and is full of rubble, but is thought to be about 8 metres in diameter. The usual double-wall construction, with a stairway running up through the cavity, can still be seen. There are guardchambers on either side of the entrance. A steatite cup was found in a niche in the wall of one of the guard chambers in the early 1900s. ps this is thought to be in the region of 2000 years old! 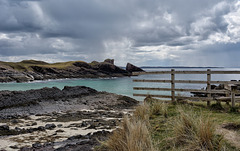 HFF- The ‘Split Rocks’ of Clachtoll

Another coastal fishing and crofting village just about 8km north of Achmelvich, here in Assynt, Sutherland. Another spot where the light paints the landscape differently every few seconds. We see here an interesting new fence and stile which takes us on over the headland to the old broch. Unfortunately you miss-out on the fabulous white sandy bay and the broch in this shot, but I hope to correct that soon. Enjoy full size. Have a great weekend. Herb 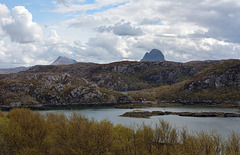 A view over this lochan near Achmelvich to the mountains of Canisp to the left and Suilven on the right. A view that I would see again and again. Notice another lochan behind this one. 'There are over 31,000 freshwater Scottish lochs, including lochans, although only around 350 are of a notable size. A lochan is the word for a small loch, although there is no clear definition for the size at which a lochan becomes a loch.' Enjoy full screen.

Achmelvich, the view to the south

A twin to my previous posting. Taken nearby with a longer lens. Enjoy full size.

The rugged view from Achmelvich

Achmelvich, one of the most beautiful sandy bays in Great Britain also has another side to it. This is the view southeast towards Lochinver and the mountains near Ullapool some distance away. Notice the snow still on their northern flanks. An area of majestic peaks, seabirds and otters here - enough to take your breath away. Enjoy full size.

Here by the lovely bay of Achmelvich in Scotland, one can relax and ponder the views. This is a sparsely populated part of the world with just a small settlement or cottage here and there. In fact during summer, far more holidaymakers are here seeking peace than locals. See PiP for beach shot Enjoy full screen and have a good week.

This is one of their latest Class 802 Series trains. Built in Italy by Hitachi and brought into service here in Britain in 2018. These travel from Manchester to Huddersfield, Leeds and York and are known as Diesel-electric bi-mode multiple (five-car) unit trains. They run by electric where possible but as seen here can run by their own diesel power too. This taken near the long 5456 yard Stanedge tunnel portal at Diggle to Marsden in Yorkshire. Enjoy large. 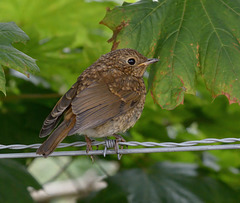 Re yesterdays photo: Is it a Wren or a Robin?

Yesterday I posted two views of this bird which raised the question as to what breed it was. One or two of you asked in which way were the tail feathers pointing? Up for a wren, down for a Robin. I think this answers the question.

A mural over-washed with reflections from the canal waters below, in this canal tunnel at the village of Diggle near my home. The canal being the 'Huddersfield Narrow'. Enjoy full size 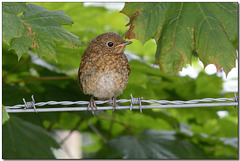 HFF- Who’s a pretty birdie then?

Seen on a fence whilst on my local walks. Not sure if it is a young sparrow, or wren. I am pretty sure it was waiting here for its parents to bring it back some food. See PiP for alternative view. Enjoy full size. Have a great weekend. Herb 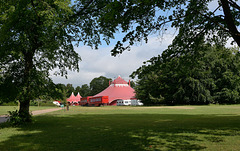 The Circus comes to town

Alexandra Park Oldham in June. The circus comes to town for a week of performances. This, for me is simply a chance sighting and I saw nothing of the artist or visitors in these days where Covid still dictates our days out. Fortunately though I saw a father buying tickets for his eager children from the box-office. Enjoy full screen. 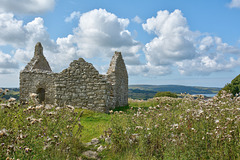 Capel Lligwy is a ruined chapel near Rhos Lligwy in Anglesey, north Wales, dating back to the first half of the 12th century. The chapel's original purpose is unknown, but it might have been used as a memorial chapel or in connection with a local royal court, or as a chapel of ease in a large parish with a growing population. It was used for a time until the early 18th century as a private place of worship for a nearby house, then later fell into disrepair. The walls still remain, with some traces of render on them internally, but there is no roof. It contains a 16th-century side chapel with a vault beneath, used as a burial chamber. It is a Grade II listed building Enjoy full screen. 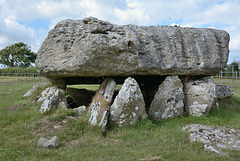 Seen almost at the end of our round coastal walk near Moelfre in North Anglesey. There was in fact an ancient settlement near here too. See PiP. Lligwy, dating from late Neolithic (New Stone Age) times, would have originally been covered by an earthen mound. When the tomb was excavated in 1908, the bones of men, women and children were found along with animal bones, shells, flint implements, pottery and a bone pin. It has a squashed look about it, as if its supporting stones are being slowly forced into the ground by its massive capstone. That’s not the case, even though this large tomb is roofed by a formidable stone 18ft/5.5m long by 15ft/4.6m wide weighing an estimated 25 tons, one of the biggest in Britain. The PiP shows one of the dwellings from the Din Lligwy (settlement) that was a lightly fortified settlement, dating from the 3rd-4th century AD, probably inhabited by the Romano-British tribe. Despite the finds mainly from the Roman period, the beginnings of settlement in this area could go back to the Iron Age.
1470 items in total
Jump to top