Diving at the Similan islands

next >
< previous
/
Close
Albums Album Photos Add a comment Most appreciated Most viewed Most commented
When I start this album from our diving tours to the Similan islands I'd like to show my underwater photos captures with a simple FUJI FinePix F31fd pocket camera usually designed for lady handbags. Its an evidence that even with a small low-cost pocket photo camera you can shoot acceptable pictures underwater.

The necessary UW housing also comes from FUJI and was a quite inexpensive equipment to start the underwater photographic captures. No flash or lightshow (divers expression for UW light) was used, the built in flash with the necessary light diffuser is strong for just half a meter ... and straight flashing means that you capture the flakes of plankton in the foreground.

Other divers spend a lot more money, sometimes their property, for UW photo or video equipments, there is no limit of expenses to the top.

I show photos from four tours to the Similan island group, the nearby islands Ko Bon and Ko Tachai (Manta ray high lights) and the five stars diving place the Richelieu Rock.

"Similan" is a Malay-Yawi word which means "nine". The group of nine islands is one of the most famous diving sites in Thailand, and noted as one of the top ten dive destinations in the world according to the National Geographic Society.

Unlike many other people (Thailand), any constructive and friendly written criticism I welcome very much. Please don't hesitate to correct me, if something is written wrong in my descriptions.

All photos posted in this album are captured with only this simple digital camera, enjoy watching the results, maybe I can encourage someone with my pictures to this beautiful kind of sport.
When I start this album from our diving tours to the Similan islands I'd like to show my underwater photos captures with a simple FUJI FinePix F31fd pocket camera usually designed for lady handbags. Its an evidence that even with a small low-cost pocket photo camera you can shoot acceptable pictures underwater. The necessary UW housing also comes from FUJI and was a quite inexpensive equipment to…  (read more) 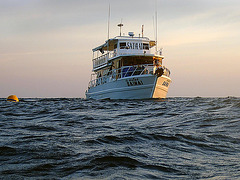 Our Saimai fixed on a mooring

There are fixed mooring places with a buoy on the surface. so the boat must not anchor and damage the undersea coral reefs. 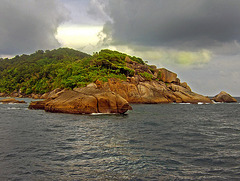 Koh Similan is the largest island of this group of nine islands and Nr 8. As no one is allowed to live on the island, only temporary stays are permitted. However, spartan accommodation exists on Number 8, Koh Similan such as bungalow and tents. 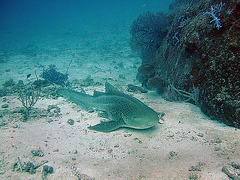 A leopard shark at the morning dive 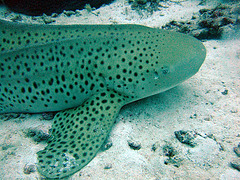 Divers can come very close to this huge fish and shoot good pictures. This sort of shark does not have teeth just hard jawbones to crack shells and mussels. 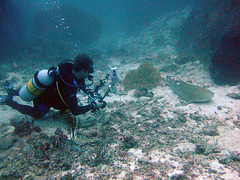 Its the best change to capture Leopard Sharks during the early morning dive at 7.00 a.m. while they still are sleeping. This sort of fish aren't early risers. 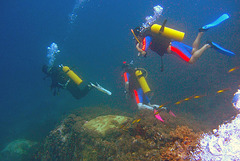 Diving in the group

Generally dive groups are not more than four divers, the instructor is diving in front, two are following and I'm shooting the picture. Diving alone is dangerous and against all rules. 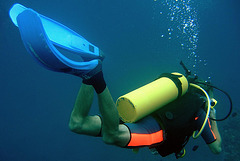 Dive down fast, go up slow

Dive down first to the deepest point then go up very slow as 10 meters in 2 minutes, thats the ideal diving profile. 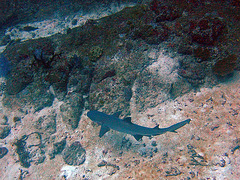 Reef sharks got very rare in Thai waters and at the Similan islands due the mass of diver tourists. This sort of sharks are very shy and swim away when we diver are coming. If you are lucky and patient to wait a few minutes, they will turn back and look to us. Although they are very shy they also are very curious. 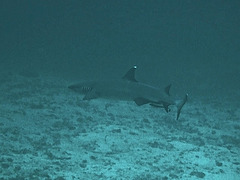 Its quite difficult to capture sharks with a simple UW camera due their fast movements. This shark perhaps was as long as two meters. Fearless and curious, whitetip reef sharks may approach swimmers closely but are seldom aggressive unless provoked. 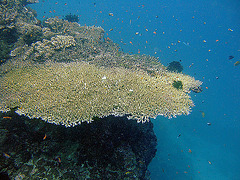 Corals crow up every where and its difficult sometime not to touch them by mistake. Unexpected streams can drift you towards corals and uncontrolled fin moves can destroy of damage parts of the beautiful fine corals or its sensible new grown up tops. 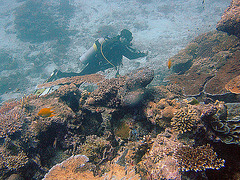 Diving in a group is necessary and important for every bodies security. The dive partner always should swim in a short distance to the dive friend. If you loose your partner its a rule to wait one minute and the get slowly up to the surface. 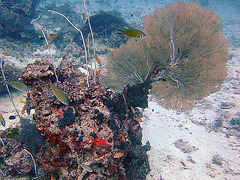 Most fish life can be watched at the coral reefs. The sea fan are found primarily in shallow waters, though some have been found at depths of several thousand feet. 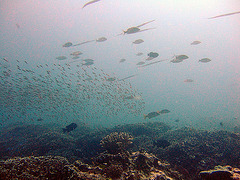 The view from the ground

After dive down to the ground the first view up to the surface. I can't stop watching the scenes over my head and would like to rest a while to soak up the underwater life. 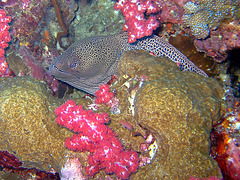 Moray looks out the cave

Most moray eels seldom leave their caves, but looking out whats happen. There also share one cave with other morays from other species. 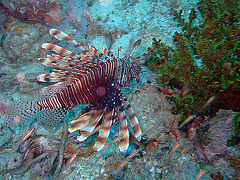 Pterois known as lion fish is a genus of venomous marine fish found mostly at the coral reef. The potency of their venom makes them excellent predators and dangerous to fishermen and divers. We divers do not come to close the beautiful colored fish can be observed in a safe distance. 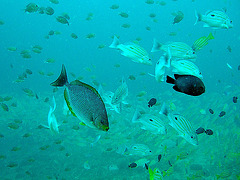 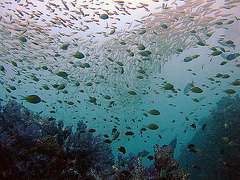 The corals give a source of food for Millions of fish. 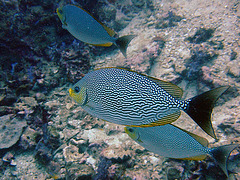 This rabbit fish often occurs in small schools of up to 10 individuals or so, in shallow coastal waters, brackish lagoons and rocky or coral reefs. Found resting in midwater at depths of 2 to 6 m when not feeding.
80 items in total
Jump to top