View only Joe, Son of the Rock's contributions
ACTIONS

View only Joe, Son of the Rock's contributions 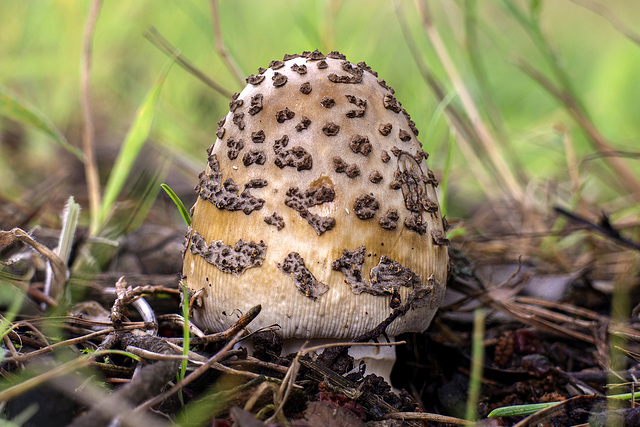 Amanita ceciliae, commonly called snakeskin grisette and strangulated amanita, is a basidiomycete fungus in the genus Amanita. First described in 1854 by Miles Joseph Berkeley and Christopher Edmund Broome, it was given its current name by Cornelis Bas in 1984. It is characterized by bearing a large fruit body with a brown cap 5–12 cm (2.0–4.7 in) across. The cap has charcoal-grey patches, which are easily removable. The stipe is 7–18 cm (2.8–7.1 in) long, white in colour, and there is no ring on it. It is slightly tapered to the top, and has irregular cottony bands girdling the base. The universal veil is grey. Spores are white, spherical in shape, non-amyloid, and measure 10.2–11.7 micrometres. The mushrooms are considered edible, but field guides typically advise caution in selecting them for consumption, due to risks of confusion with similar toxic species. A. ceciliae is found in woods throughout Europe and North America, where it fruits during summer and autumn. Quoted from Wikipedia.

Rosalyn Hilborne club
It is beautiful but if they advise caution, I would definitely leave it alone :)
Well captured Joe. Cheers, Rosa.
13 months ago. | Permalink
Joe, Son of the Rock club has replied to Rosalyn Hilborne club
I am pleased to report, Rosa, I didn't eat this mushroom. Thanks for your great comment. Cheers, Joe
13 months ago. | Permalink