Display photos of:
Latest posted Navigate on the map Photos with specific people Most appreciated Most viewed Most commented Search by keywords Search by date
See also... Johan's
favorite photos All the photos where
Johan appears
View on map
OpenStreetMap Mapbox Center Close 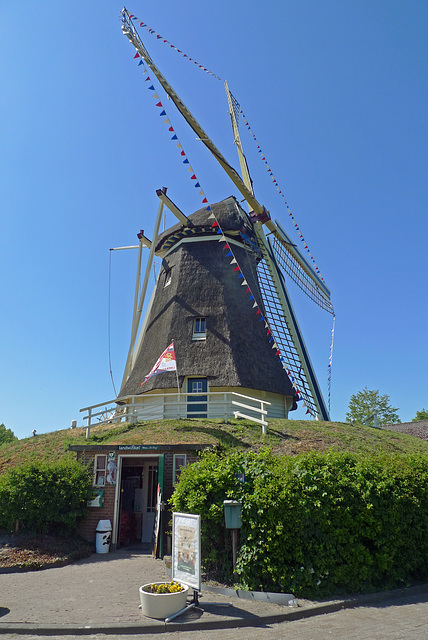 Windmill De Duif (The Pigeon) was built in 1886 on the spot where a previous mill was burned down after a lightning strike. The mill - formerly called the Veelhorster molen was owned in the 17th century by the influential Feyth family from Elburg and was used for grinding grain from the beginning. It is an octagonal 'belt mill' (belt = a man made hill); the hill has a height of over 4 metres. The mill has been restored in 1963 and 1982. After this restoration, grain is milled again on a voluntary basis. 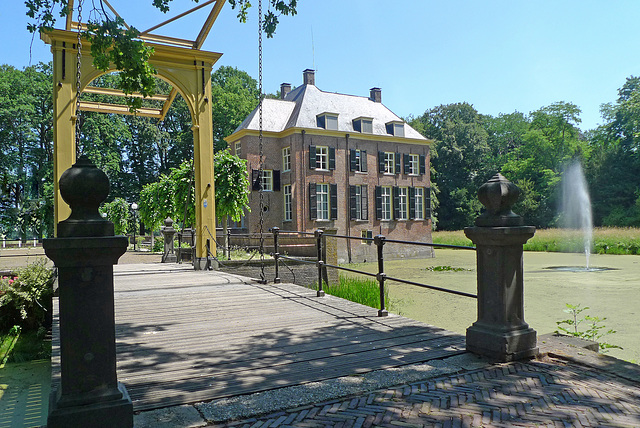 The first Kasteel Neerijnen (Castle Neerijnen) was probably built around 1350 and was originally called Klingelenburg . It was the first noble house in Neerijnen. The inhabitants of the castle carried the name “De Cock van Neerijnen”. The present castle was built around 1600 on the foundations of the older one. It was radically rebuilt in the 18th century and was extended in the late 19th century. Together with the Kasteel Waardenburg (PiP4) built in 1265, it forms one estate. From 1700 onwards both castles have always had the same owners. After the “De Cock” family, the estate was owned by various noble families. At the end of 1827, the estate came into the hands of “Frederik Willem Floris Theodorus baron van Pallandt”. This family owned the estate until 1971. On May 6 of that year the last baroness of “Pallandt van Neerijnen en Waardenburg” died. Three years later the estate came into the hands of the Stichting Gelders Landschap & Kasteelen , a foundation for the protection of nature and landscape in the province of Gelderland. From 1980 to 2019, Kasteel Neerijnen was in use as the town hall of the former municipality of Neerijnen. The castle garden - situated between the castle and the reformed church of Neerijnen - had been seriously neglected for a long time. Since 1996 this garden has been renovated and maintained by volunteers, taking into account the original layout. The garden consists of several parts, including a herb garden, vegetable garden, flower garden and a rose garden. 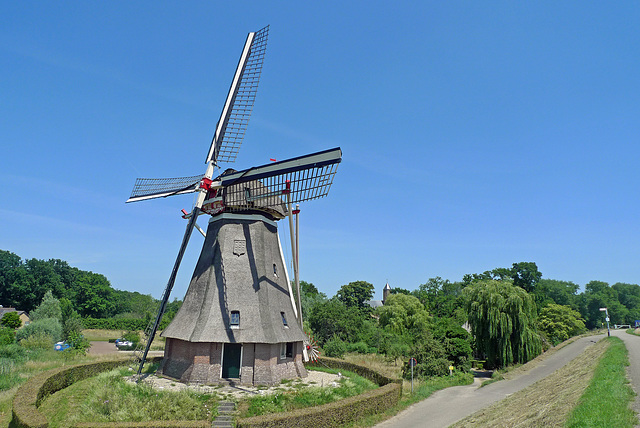 Before the year of 1780 there was a post mill on the site of this mill. That mill had been blown over and repaired, but in the year 1780 it was demolished and replaced by the present hexagonal mill. The Molen van Waardenburg is one of the eight remaining hexagonal mills in the Netherlands. For many years the mill belonged to the Waardenburg-Neerijnen estate. In the First World War, the windmill was used to generate electricity. After the high water levels in the river Waal in 1995, the dike of the river was made heavier and raised, after which the mill was also raised by one and a half meters. Because of its location, the corn mill is considered being one of the more beautiful mills in the Netherlands. Since 2009 the mill is owned by Stichting Geldersch Landschap & Kasteelen , a foundation for the protection of nature and landscape in the province of Gelderland. The mill is still regularly used for grinding grain by volunteers. 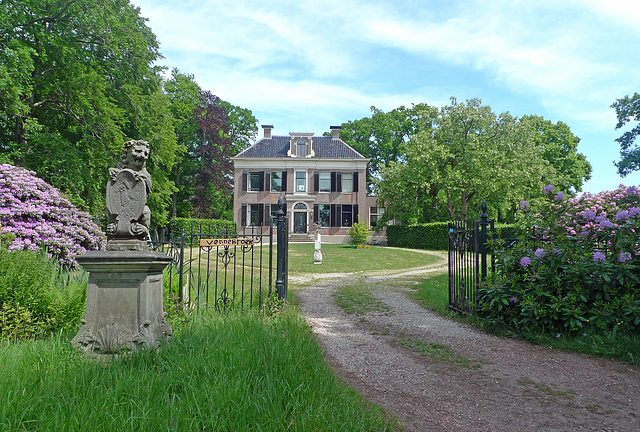 Not much is known about the origins of Huis Vennebroek (Manor Vennebroek). From 1689 to 1747 the house had the so-called right of havezate (manor or fortified house). In 1768 the manor was mentioned in an advertisement in a local newspaper. In 1848, Jonkheer Hooft van Iddekinge rebuilt the house extensively, retaining a large part of the basement and the ground floor. In 1912 the estate was bought by P.A. Camphuis, a merchant from Groningen. He was also the owner of the adjacent Friesche Veen estate; Vennebroek and Friesche Veen have formed a unit ever since. Camphuis restored the house, but did not stay there long. The manor remained in the family for a long time; the wife of his eldest son lived there until her death in 1994. Around 1985 the house and the estates became the property of Natuurmonumenten (Society for preservation of nature monuments in the Netherlands). Since 2014 the house has been privately owned and inhabited again. Huis Vennebroek is surrounded by a horseshoe-shaped moat. The estate has many old beeches and chestnuts; the oldest is more than 300 years. In the autumn the estate is known for its many species of mushrooms. 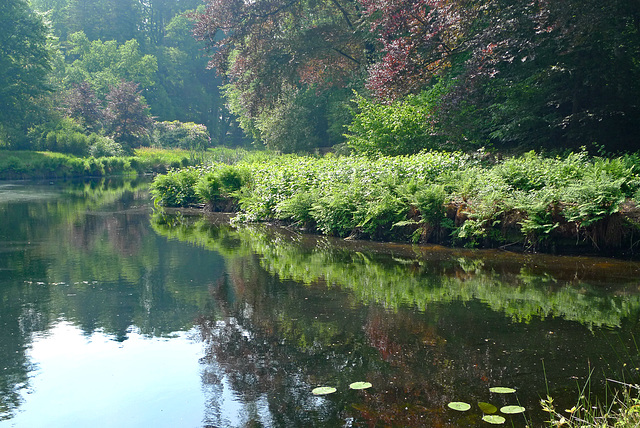 Landgoed De Braak (De Braak Estate) already existed around 1700. Lieutenant E.F. ter Voet van Schelfhorst was then the owner, who was married to Miss Von Braake. Probably the estate was named after her; another possibility is that the name was derived from "broek" = low marshy land. The original country house De Braeke stood between two ponds. The house became uninhabited and was demolished in 1896. Parts of the mansion were used in 1916 for the renovation of the current house of the caretaker of the area (PiP4). De Braak now consists of a monumental park forest with ponds, imposing - often centuries-old – trees, rhododendron bushes and meadows. The well-known garden architect Roodbaard designed the park in 1825. The park also offers a berceau and a maze of hornbeams. The estate is known for its flowering spring plants, such as snowdrops, wood anemones and daffodils. Since 1920 De Braak has been owned by Natuurmonumenten , a society for preservation of nature monuments in the Netherlands. The estate is freely accessible. 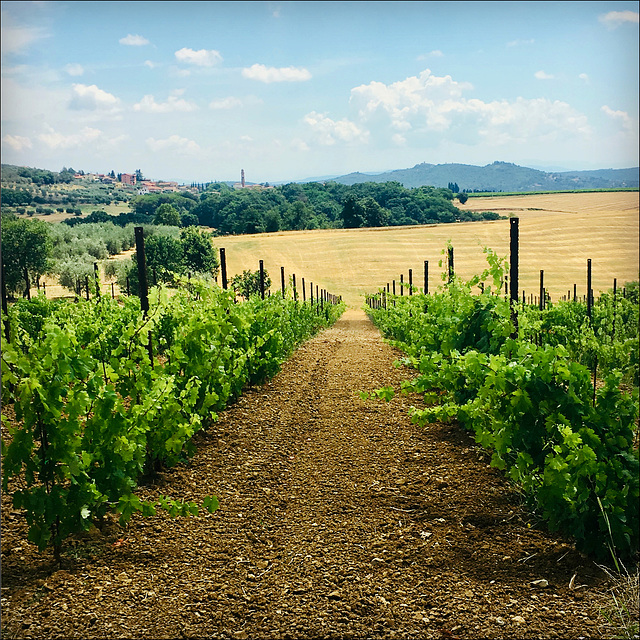 The new vineyard is growing. 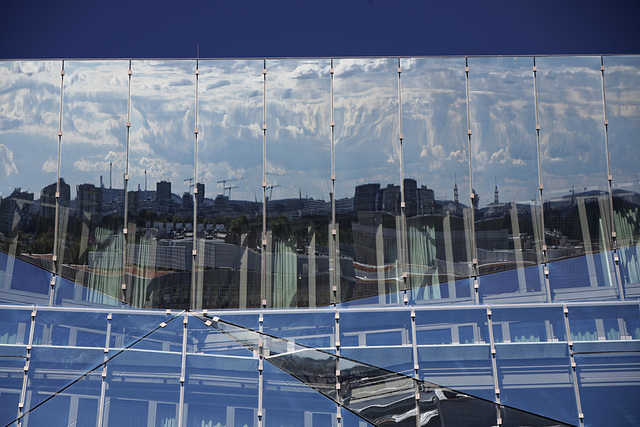 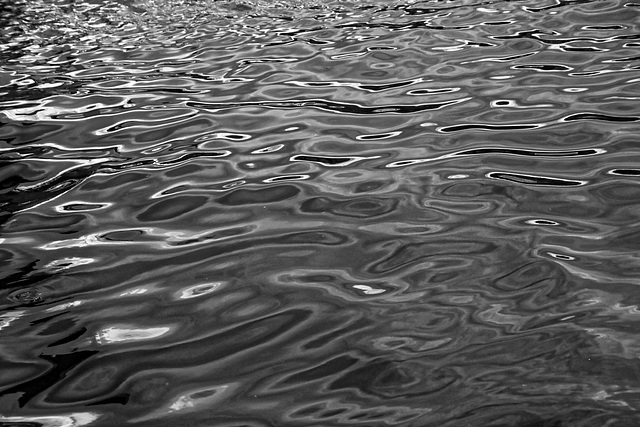 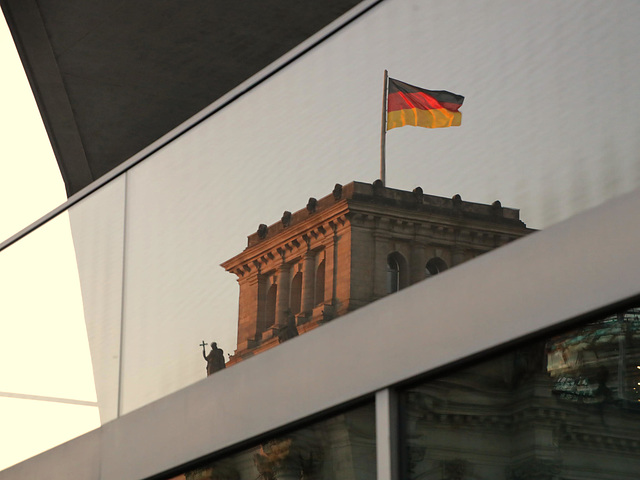